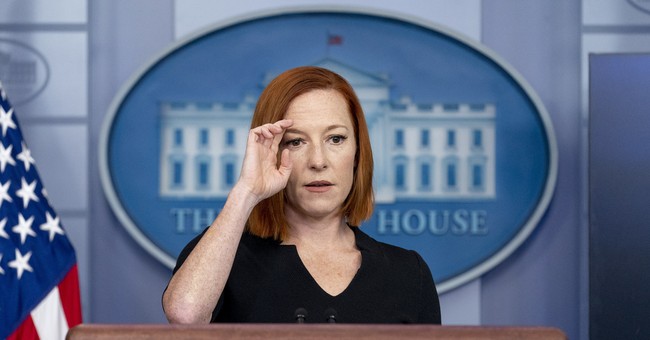 President Biden spent more than a quarter of his first year in office at home in Delaware, prompting questions about whether the administration plans to release visitor log information from his private residences.

"In light of President Biden's first year coming to a close, the data indicates that he spent a quarter of his days, at least partially in Delaware,” a reporter asked White House Press Secretary Jen Psaki. “Will the White House be reconsidering the decision not to release visitor log information from his Delaware residences?"

In dodging the question, Psaki gave a bizarre response that invoked the president's deceased wife and son.

“Well, the president goes to Delaware because it’s his home. It’s also where his son and former wife are buried and it’s a place that is close to his heart,” she said during the daily press briefing. “A lot of presidents go visit their home when they are president.”

Psaki continued: “We also have gone a step further than the prior administration and many administrations in releasing visitor logs of people who visit the White House and we’ll continue to do that. I think we’re done and going to move on.”

REPORTER: "Will the White House be reconsidering the decision not to release visitor log information from [Biden's] Delaware residences?"

PSAKI: "[We release] visitor logs of people who visit the White House & we'll continue to do that...I think we're done & going to move on." pic.twitter.com/ZCB7U0ql80

According to the New York Post, Biden spent at least part of 101 days at either his Wilmington residence or Rehoboth Beach vacation home.

Psaki has previously said the White House would not “be providing information about the comings and goings of the president’s grandchildren or people visiting him in Delaware.”

Presidents can pick and choose what they reveal about visitor logs thanks to an appeals court ruling that Attorney General Merrick Garland wrote as a judge in 2013. Garland wrote that a president’s constitutional right to confidential communications means that the Freedom of Information Act doesn’t apply to visitor logs held by the Secret Service.

The Trump White House made full use of Garland’s ruling to abandon disclosure of logs. Then-White House communications director Michael Dubke said Trump’s decision was made in part due to “the grave national security risks and privacy concerns of the hundreds of thousands of visitors annually.” (NY Post)

But the refusal to disclose visitor information from the president's private residences has raised concerns about transparency, specifically related to Hunter Biden.

By Biden’s own admission, he sometimes talks policy with his son, who has an array of foreign clients that present conflicts of interest. The president said in November that he consulted with his son ahead of a climate change conference in Scotland.

The links between the elder Biden and his son’s business ventures often are murky. For example, it’s unclear if they have discussed his new art career, in which Hunter hopes to earn as much as $500,000 from anonymous buyers of his novice artwork, a process which experts say is open to potential influence-peddling. (NY Post)