Dem Governor Rejects Mask Mandates, Points Out the Obvious About How Well They're Working in NYC 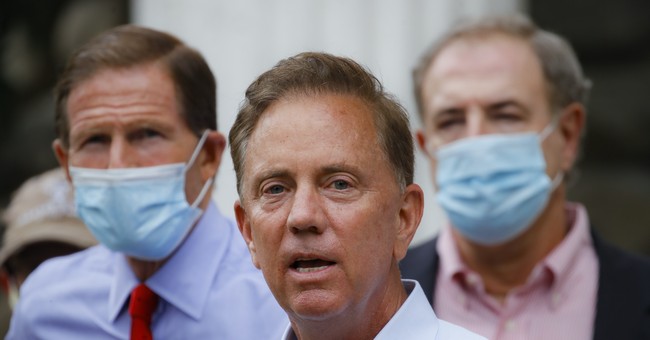 As Omicron sweeps the nation, some on the left are beginning to change their tune about certain mitigation measures.

Connecticut Gov. Ned Lamont said Monday he won’t be continuing with a statewide mask mandate, The Daily Caller first reported. The Democratic governor pointed to New York City, where Covid-19 is spreading like wildfire even with a mask mandate in place.

Asked in a press conference about whether masks could also play a role in helping “curb the spike that we’re currently in,” Lamont said it doesn’t appear to be doing much in the Big Apple.

“Well it’s not curbing the spike down in New York City, which is probably ground zero,” Lamont responded.

He instead emphasized the need to protect the most vulnerable and push booster shots.

“If I think about things, I certainly think about nursing homes and other congregate settings where I think the booster shot is probably the No. 1 priority, to make sure everybody that can be boosted is boosted there. That would be my next priority.”

In the last two weeks, Covid-19 cases have increased 54 percent in Connecticut, hospitalizations have jumped 40 percent, and deaths are up 109 percent, according to data compiled by The New York Times.

“Connecticut is currently experiencing another surge in COVID-19 cases that is being driven mostly by the highly transmissible omicron variant. As a result, the demand for tests has outpaced the supply of testing available through our statewide network of about 400 sites,” Lamont said in a statement. “We have to get 2022 off to a good start by helping residents identify COVID-19 quickly and take those steps to isolate appropriately to curb any further spread.”