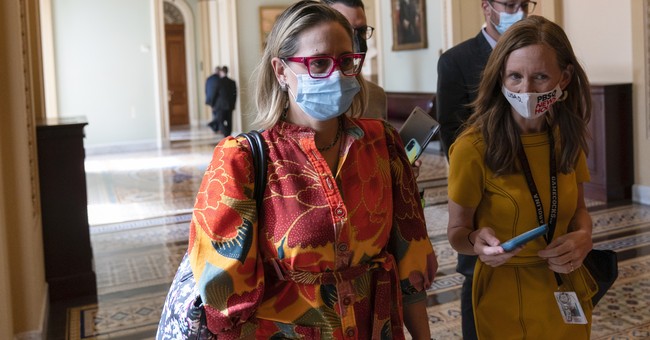 Senate Democrats appear to be in agreement over a new corporate tax proposal that would help pay for the president’s massive social spending bill.

The measure, which taxes corporations with more than $1 billion in annual profits at a 15 percent rate, was introduced by Sens. Elizabeth Warren (D-MA), Angus King (I-ME), and Ron Wyden (D-OR).

"We can't let billionaire corporations get away with paying almost nothing in taxes, while Americans are left holding the bag. My new plan with @SenAngusKing and @RonWyden will ensure these companies stop cheating the system," Warren tweeted.

Getting moderate Sens. Kyrsten Sinema and Joe Manchin on board is a big step for Democrats, especially considering the Arizona Democrat had previously been against changes to the corporate tax rate.

"This proposal represents a commonsense step toward ensuring that highly profitable corporations—which sometimes can avoid the current corporate tax rate—pay a reasonable minimum corporate tax on their profits, just as everyday Arizonans and Arizona small businesses do," Sinema said.

"I look forward to continuing discussions with the White House and colleagues to expand economic opportunities, retain America's economic competitiveness, and help Arizona families get ahead," she added.

Manchin, for his part, said he’s open to the corporate tax but still wants to see the text.

According to King, the new corporate minimum tax proposal could bring in as much as $400 billion.

Reporting on the development, Fox News' Sean Hannity said it's a sign Manchin and Sinema "are caving."

"Make no mistake, this new tax will not harm corporations. How many times do I have to say it? Corporations don’t pay taxes. They pay their employees less and then they pass the cost onto you," he argued. "It will hurt you even further on top of Biden inflation, on top of the high energy prices we'll now pay. This tax will get passed onto you. Everything you buy will cost more, on top of what we are already paying more."

Hannity added: "Anyone who doesn’t walk in lock step with this radical base has no future in the party."