Taliban Frees Thousands of Prisoners From Bagram. Al Qaeda Members Were Among Them. 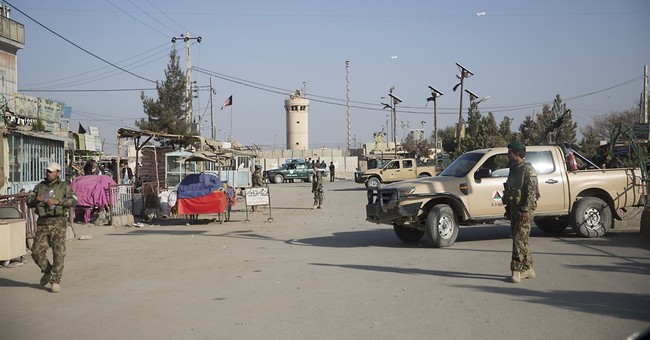 The Taliban seized the formerly U.S. controlled Bagram Air Base on Sunday, which was turned over to the Afghanistan government last month, freeing thousands of prisoners held at the base in the process.

According to the Associated Press, there were approximately 5,000 prisoners being held at the base, including members of al Qaeda, ISIS, and the Taliban.

Taliban spox: “The most important prison at Bagram Airfield was also captured. The latest info shows that all the prisoners have been transferred to a safe place.” Senior members of al-Qaeda & the Taliban were among thousands jailed there when U.S. abandoned the airfield in July. https://t.co/Pqw5TfKp9n

The Taliban claims it overran Bagram Air Base and freed prisoners. Many high value detainees were located there, including members of Al Qaeda. This will reverberate for years to come. https://t.co/yt3eG0uZNk

There is legitimate disagreement over this war. But it’s reasonable to predict there will be future terror attacks against America resulting from the Taliban’s rise, the freed al Qaeda prisoners, and Afghanistan’s descent into chaos.

In May, William Lloyd Stearman, who served on the National Security Council staff under four presidents, detailed the significance of Bagram.

The Biden administration’s decision to remove all U.S. forces from Afghanistan could cost the country an important strategic asset, the Bagram Air Base. For years, the base has been conducting tactical air operations in support of American and Afghan troops. Bagram is 40 miles north of Kabul and is impressive in size: The installation covers about 30 square miles. Its 12,000-foot runway can accommodate U.S. military aircraft of any size.

The location is also strategic, to say the least: Bagram is about 400 miles west of China and about 500 miles east of Iran. This is a good place to have American assets. Keeping the base open could hardly be called a provocation, given it’s been around for years. But manning this base requires a continued military presence in Afghanistan, which would also ensure the country doesn’t return to being a base for terrorists. (WSJ)

You want to talk about intelligence failures and failures of leadership? The U.S. military should have foreseen the problem of leaving Kabul as your evac point. I warned people about this. Bagram had to stay open.

CENTCOM commander should have insisted Bagram remain open. This should have been non-negotiable and he should have resigned in protest if he was forced to operate in this environment. Sometimes you need to stand up and have courage. Our commanders have none.

Salem radio host Hugh Hewitt reminds that it didn't have to be this way.

The @WSJ editors accurately, succinctly damn @POTUS @JoeBiden. When Taliban violated the Doha agreement —premised on a negotiated power sharing— the U.S. was free to keep Bagram, it’s 2500 troops and NATO’s 5000, to use air power. He could have saved thousands. He chose not to. pic.twitter.com/uIoHlWWaAn

Good for @LeaderMcConnell to carefully, completely state the obvious which Twitter battalions are attempting to distort and deny. The 2/29/20 agreement was predicated on ceasefire and negotiations. Bagram did not have to be abandoned. The first breach by Taliban ended that deal. https://t.co/snsNlo6gUC