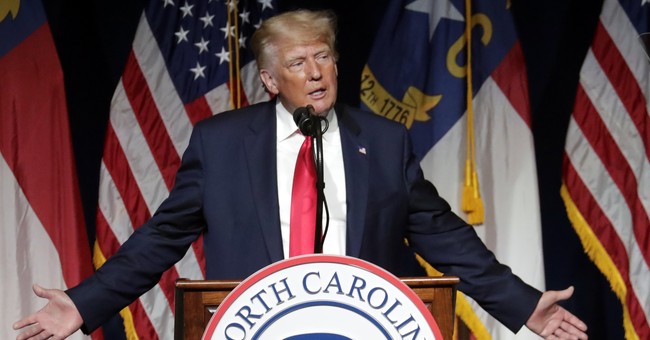 Critics on social media had three words after USA Today published a fact check of Donald Trump’s pants on Monday: “journalism is dead.”

In a tweet linking to the story, USA Today wrote: “Video footage and images taken throughout the night show the pants had a zipper in the front, indicating Trump wore his pants facing the right way.”

Video footage and images taken throughout the night show the pants had a zipper in the front, indicating Trump wore his pants facing the right way. https://t.co/bogANIrBwv

The outlet analyzed a claim that circulated on Instagram saying Trump wore his pants backwards during a speech before the North Carolina Republican Party convention on Saturday. The user posted a screengrab of a tweet that pictured the front of the former president’s pants.

Others are noting this, but it can't be shared enough: Donald Trump gave his big speech today with his pants on backwards. Look close and tell me I'm wrong.pic.twitter.com/sRsoJVfyf8

For what it's worth, Snopes at least acknowledged how ridiculous it was that they had to fact check the claim.

Yes, this was perhaps not the way we wanted to spend our Sunday. But we check what people us ask, so.... ?????

How about throwing a few bucks our way, so we can be here for the next breaking controversy? https://t.co/WNLMCiLVcl

Critics sounded off on the absurdity of the fact checks.

So USA Today had a camera focused on President Trump’s pants during his speech? Uh-huh. Totally normal. Not weird on any level. #TrumpDerangementSyndrome is real, and is rampant throughout the main stream media. https://t.co/FkggD4Qpir

Amazing. Thank you @USATODAY, your service is invaluable https://t.co/yoggVr838n

How is this even a real headline? ?? https://t.co/Gsu9gHTP6N