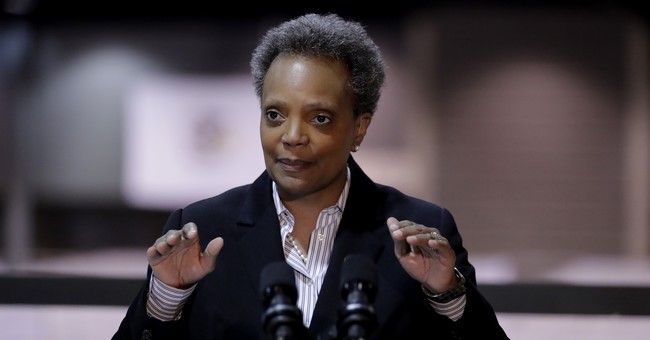 Chicago Mayor Lori Lightfoot confirmed claims that she was only granting exclusive, one-on-one interviews to black or brown journalists, defending her decision in a two-page letter to Chicago media outlets on Wednesday.

“I have been struck since my first day on the campaign trail back in 2018 by the overwhelming whiteness and maleness of Chicago media outlets, editorial boards, the political press corps, and yes, the City Hall press corps specifically,” Lightfoot wrote in the letter.

The letter came after a firestorm was set off on Twitter when a local reporter brought attention to the way the mayor grants interviews as Lightfoot nears the halfway mark of her first term.

Lightfoot also took to Twitter to discuss the issue further.

Diversity and inclusion is imperative across all institutions including media. In order to progress we must change.

This is an imbalance that needs to change. Chicago is a world-class city. Our local media should reflect the multiple cultures that comprise it.

We must be intentional about doing better. I believed that when running for office. I stand on this belief now. It’s time for the newsrooms to do better and build teams that reflect the make-up of our city.

One local reporter said he canceled his interview with her in protest. A Washington Post reporter responded, pointing out that while it's normal to pick and choose who to conduct an interview with, it's rarely done based on gender or race - "or at least they don't admit they do."

Fact is, elected officials, candidates, celebrities, athletes etc. choose who they want to interview them all the time. They just don't do so on the basis of race or gender. Or at least they don't admit they do. https://t.co/VJpXrJTkPV

Lightfoot said she has bigger fish to fry as mayor but couldn't stay silent any longer.

"This isn't my job. It shouldn't be," she wrote. "I don't have time for it. But as with so many festering problems, it has only gotten worse with time. So here I am, like so many other Black women before me, having to call your attention to this problem."