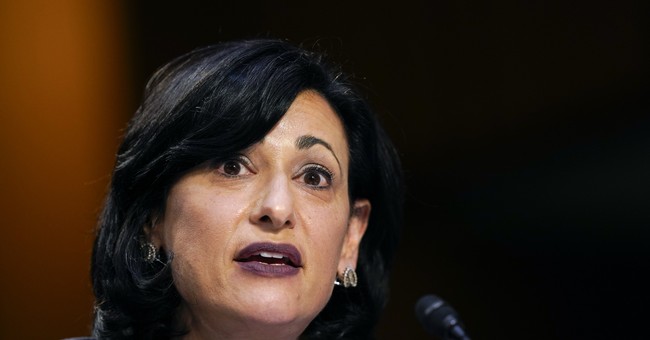 Despite the warning of “impending doom” over a spike in COVID-19 cases less than two months ago, Centers for Disease Control and Prevention Director Rochelle Walensky insisted during an interview Sunday that the new guidance on masks for vaccinated individuals was due to rapidly evolving science.

“It was just Tuesday when you sat before a Senate committee and you were adamant then that masking and social distancing should remain in place,” ABC’s Martha Raddatz stated, pointing to a Washington Post report saying the mask decision had already been made at that point.

“When it was finally announced on Thursday, it came as a huge surprise, and it left some administration officials, doctors, and businesses off guard. So, why so suddenly, and why did you not tell the Senate panel what you had decided?” she wondered.

Walensky first pointed to a drop in case numbers and widely available vaccines, before arguing how the science had evolved.

“We now have science that has really just evolved even in the last two weeks that demonstrates that these vaccines are safe, they are effective, they are working in the population, just as they did in the clinical trials,” she said, “that they are working against our variants that we have here circulating in the United States, and that, if you were to develop an infection, while -- even if you got vaccinated, that you can't transmit that infection to other people.”

She continued: “Some of that science was really evolving as late as last Thursday. And one of the published -- one of the papers, the largest paper, was published from the CDC just the day before yesterday.”

The developments were continuing to happen as she was testifying, Walensky said.

“So, we were actively reviewing that science during the past week. We were making decisions and moving -- moving, and our subject matter experts while working just as I was testifying in front of Congress.”

“I told the American people I would deliver the science as soon as we have it,” she added.

Walensky was also sure to note that the new guidance is "not permission for widespread removal of masks."

“For those who are vaccinated, it may take some time for them to feel comfortable removing their masks, but also that these decisions have to be made at the jurisdictional level, at the community level. Some communities have been hit harder than others, have lowered vaccination rates than others," she said.