Attorney for Floyd, Wright Families Is Already Peddling a Lie About Police Shooting of Columbus Teenager 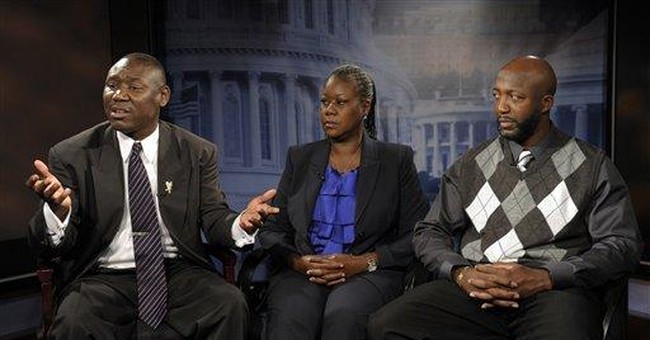 Shortly after civil rights attorney Ben Crump celebrated the verdict in former Minneapolis police officer Derek Chauvin’s trial in the death of George Floyd, he moved on to commenting about the police shooting of Ma’Khia Bryant in Columbus, Ohio.

Crump, who represented George Floyd’s family as well as Michael Brown Jr., Breonna Taylor, Jacob Blake, Ahmaud Arbery, and Daunte Wright’s families, framed the shooting as another case of an “unarmed” person of color being killed by police.

“As we breathed a collective sigh of relief today, a community in Columbus felt the sting of another police shooting as @ColumbusPolice killed an unarmed 15yo Black girl named Makiyah Bryant," Crump tweeted. "Another child lost! Another hashtag. #JusticeForMakiyahBryant"

As we breathed a collective sigh of relief today, a community in Columbus felt the sting of another police shooting as @ColumbusPolice killed an unarmed 15yo Black girl named Makiyah Bryant. Another child lost! Another hashtag. ???????#JusticeForMakiyahBryant https://t.co/9ssR5gfqm5

As Julio reported, Bryant was swinging a knife at two other people when the officer shot her.

The 10-second clip begins with the officer getting out of his car at a house where police had been dispatched after someone called 911 saying they were being physically threatened, Interim Police Chief Michael Woods said at the news conference. The officer takes a few steps toward a group of people in the driveway when the girl, who was Black, starts swinging a knife wildly at another girl or woman, who falls backward. The officer shouts several times to get down.

The girl with the knife then charges at another girl or woman who is pinned against a car.

From a few feet away, with people on either side of him, the officer fires four shots, and the teen slumps to the ground. A black-handled blade similar to a kitchen knife or steak knife lies on the sidewalk next to her. (Cleveland.com)

The shooting took place minutes before the verdict in Chauvin's trial was handed down.

Can you uh...repeat that "unarmed" part for the whole call real quick? pic.twitter.com/t7f5z7ufwn

She was literally trying to kill another girl. https://t.co/B5cWdXjEPc

I wonder if Twitter will flag this as disinformation, given that it's provably false and it stokes existing tensions.

It could be the cop is guilty of her death, but she wasn't unarmed. She was attacking someone with a knife, by all appearances. https://t.co/eInQoDiyc9

I didn't know wielding a knife and trying to stab two people was "unarmed!"

It's like you profit when people of different races hate each other and there's unrest in the streets. https://t.co/a3rY8VTxxm