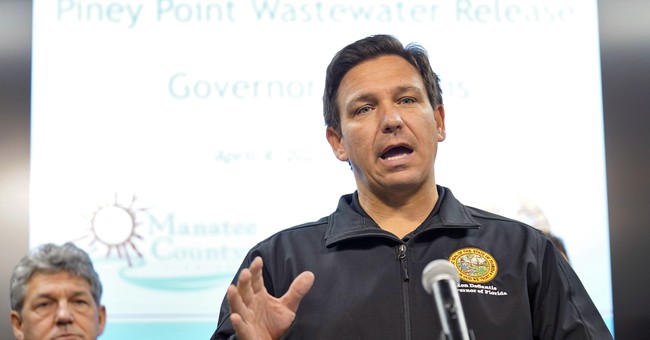 Florida Gov. Ron DeSantis announced Thursday the state is “fighting back” against the Centers for Disease Control and Prevention, filing a lawsuit to allow cruise ships to start sailing again.

“We don’t believe the federal government has the right to mothball a major industry for over a year based on very little evidence and very little data," Gov. DeSantis said. "I think we have a good chance for success.”

This lawsuit is necessary to protect Floridians from the federal government’s overreach and resulting economic harm to our state. https://t.co/I0uLeBzZqZ

In addition to the CDC, the lawsuit is also against the Biden administration and the U.S. Department of Health and Human Services, state Attorney General Ashley Moody said at a press conference.

Without action, Moody said the companies will move cruises to other countries and “Florida will not allow that to happen,” she added. “Lives are on the line.”

The suit, filed in the United States District Court in Tampa, seeks a preliminary and permanent injunction against CDC guidelines on cruise ships, claiming the industry “has been singled out, and unlike the rest of America, prevented from reopening. ... As a result, the industry is on the brink of financial ruin.” […]

Florida has three of the world’s busiest cruise ship ports: Miami, Port Canaveral and Port Everglades. The industry employs thousands of workers and generates billions for the state’s economy as millions of people typically cruise from one of Florida’s ports each year. […]

Several cruise lines have returned to sailing in other parts of the world, but none have met the CDC’s requirements so far to be able to cruise from the United States. Disney and Carnival have canceled its cruises scheduled for June following new technical guidelines released by the CDC last week. (Orlando Sentinel)

In a statement released Monday, the Cruise Lines International Association called on the CDC to lift its Framework for Conditional Sailing Order.

"The new requirements are unduly burdensome, largely unworkable, and seem to reflect a zero-risk objective rather than the mitigation approach to COVID that is the basis for every other US sector of our society. The effect of these new mandates is that nearly half a million Americans-- from longshoremen and ground transportation operators to hotel, restaurant, and retail workers, travel agents, and tens of thousands of businesses that service cruise ships, are continuing to financially suffer with no reasonable timeline provided for the safe return of cruising," the statement said.

"The irony is that today an American can fly to any number of destinations to take a cruise, but cannot board a ship in the U.S. This deprives U.S. workers from participating in the economic recovery and does not recognize the public health advances that have been made over many months, including the ability to effectively mitigate risk on cruise ships. With no discernable path forward or timeframe for resumption in the U.S., more sailings originating in the Caribbean and elsewhere are likely to be announced, effectively shutting American ports, closing thousands of American small businesses, and pushing an entire industry off- shore."