What Do Florida's Seniors Think About the Publix Partnership? DeSantis Publishes Their Letters to Him. 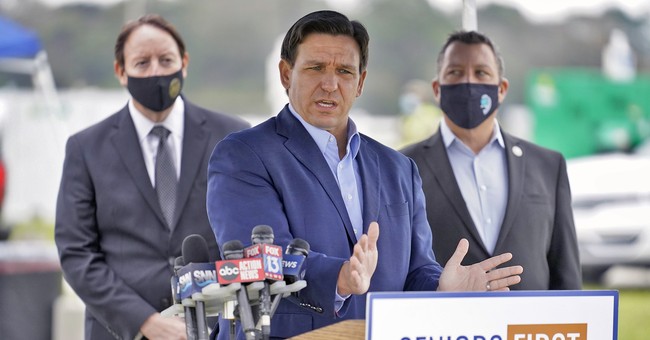 Despite 60 Minutes' attempt to push a false narrative that Gov. Ron DeSantis engaged in a pay-to-play scheme with the grocery store chain Publix in the state’s vaccine distribution, the governor and plenty of others have stepped in to correct the record.

On Monday, the governor also published 17 pages of letters that Florida seniors wrote, thanking him for the partnership.

“I never write elected officials, so believe me, you did something right,” Michael wrote on Jan. 7, commenting on how smoothly the process was for his father.

“When we voted for you, we knew that you would lead Florida into the future. Little did anyone know how treacherous that future would be,” William wrote on Jan. 13. “The hurricanes were child’s play compared to how you have led the nation in dealing with the spread of the virus, the reopening of businesses and now the vaccine distribution. You are a champion for Florida…”

On Feb. 4, Deb wrote to tell the governor how much she appreciates the way he has handled the pandemic. “I also saw what you are doing for the more remote and less fortunate areas to get them vaccines and I applaud that as well,” she added.

Plenty of other messages extolled the way he handled the vaccine roll-out, and you can read them all here.

In a statement, DeSantis explained the partnership with Publix.

Florida was one of the first states in the nation to partner with pharmacies to administer the vaccine. CVS and Walgreens were the first pharmacies to receive the vaccine in the state of Florida for the mission to vaccinate residents and staff of Florida’s long-term care facilities.

Then, in early January, Florida led the nation by being the first state to partner with a retail pharmacy to increase access to vaccinations for seniors in our communities ahead of the Federal Retail Pharmacy Program. Florida partnered with Publix because they were ready to administer the vaccine in their pharmacies in a matter of days, whereas other pharmacies were not ready.

Florida’s decision to utilize Publix early on helped vaccinate thousands of people who may not have otherwise had access. This was one of the most effective ways to get shots in arms. Not utilizing this partnership with Publix as soon as possible would have been malpractice, especially as the state was racing to vaccinate as many people as possible, as quickly as possible.

To date, Publix has administered more than one million doses of the COVID-19 vaccine in Florida.

He also blasted the “60 Minutes” report on Monday with Fox News’s Tucker Carlson.

Nearly 3.5 million residents over the age of 65 have been vaccinated in the Sunshine State, leading to a drastic reduction in COVID-19 cases and hospitalization.