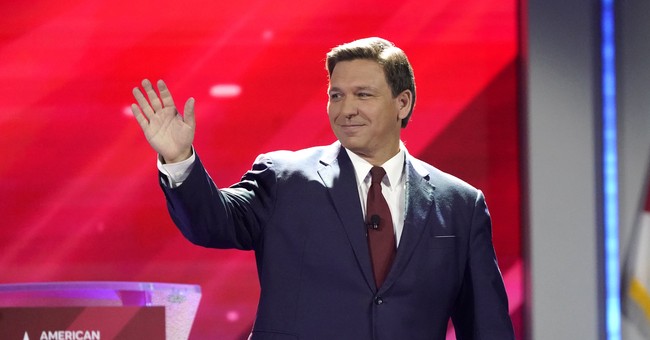 The news media cannot and will not stop baselessly attacking Florida Governor Ron DeSantis.  We've been following this trend for months, issuing one fact-check after another in the process.  As Leah covered this morning, 60 Minutes attempted over the weekend to resurrect the Publix grocery store vaccine distribution "scandal" (we touched on it in this piece back in February), which goes a little something like this, the way they tell it: Florida's largest grocery store made a political contribution to DeSantis, who then awarded them a significant COVID-related contract.  Pay for play!  Corruption!  The facts do not support this framing at all.  60 Minutes viewers saw this version of the exchange between correspondent Sharyn Alfonsi and Gov. DeSantis:

This was edited for time, and CBS cut out a very detailed explanation DeSantis relayed explaining why "pay for play" accusations are groundless.  Totally unmoved by any of those facts, Alfonsi reiterates the false attack line, understandably drawing DeSantis' ire.  The pared down clip above is heavy on DeSantis being prickly in his denials, but light on the very specific answer he gave, which the CBS correspondent appeared to simply ignore.  Also, notice the sleight of hand included in the report: The governor says he spoke with a number of officials in Palm Beach County about the Publix decision, including the "administrator."  The 60 Minutes segment appears to rebut that claim by quoting Commissioner Melissa McKinlay, a Democrat, claiming that DeSantis never met with her.  Does that prove he's lying?  No, because there are seven commissioners in the county (also, see update). Frankly, DeSantis could have just said, "Publix is our dominant and most popular grocery chain throughout the state, with hundreds of locations.  It was a no-brainer to go with them, and it's worked very well.  That call had nothing to do with political donations, and I'll remind you that Publix has contributed tens of thousands of dollars to Democrats in recent cycles, too."  That would be accurate and sufficient in my mind.  But he was even more granular in his rejection of the bogus narrative (via the Daily Wire, with all the bolded words omitted from the 60 Minutes report) at the press conference:

Sharyn Alfonsi: Publix, as you know, donated $100,000 to your campaign, and then you rewarded them with the exclusive rights to distribute the vaccination in Palm Beach—

Ron DeSantis: So, first of all, that — what you’re saying is wrong. That’s—

Sharyn Alfonsi: How is that not pay-to-play?

Ron DeSantis: —that, that’s a fake narrative. So, first of all, when we did, the first pharmacies that had it were CVS and Walgreens. And they had a long-term care mission. So they were going to the long-term care facilities. They got the vaccine in the middle of December, they started going to the long-term care facilities the third week of December to do LTCs. So that was their mission. That was very important. And we trusted them to do that. As we got into January, we wanted to expand the distribution points. So yes, you had the counties, you had some drive through sites, you had hospitals that were doing a lot, but we wanted to get it into communities more. So we reached out to other retail pharmacies — Publix, Walmart — obviously CVS and Walgreens had to finish that mission. And we said, we’re going to use you as soon as you’re done with that. For Publix, they were the first one to raise their hand, say they were ready to go. And you know what, we did it on a trial basis. I had three counties. I actually showed up that weekend and talked to seniors across four different Publix. How was the experience? Is this good? Should you think this is a way to go? And it was 100% positive. So we expanded it, and then folks liked it.

And I can tell you, if you look at a place like Palm Beach County, they were kind of struggling at first in terms of the senior numbers. I went, I met with the county mayor. I met with the administrator. I met with all the folks in Palm Beach County, and I said, “Here’s some of the options: we can do more drive-through sites, we can give more to hospitals, we can do the Publix, we can do this.” They calculated that 90% of their seniors live within a mile and a half of a Publix. And they said, “We think that would be the easiest thing for our residents.” So, we did that, and what ended up happening was, you had 65 Publix in Palm Beach. Palm Beach is one of the biggest counties, one of the most elderly counties, we’ve done almost 75% of the seniors in Palm Beach, and the reason is because you have the strong retail footprint. So our way has been multifaceted. It has worked. And we’re also now very much expanding CVS and Walgreens, now that they’ve completed the long term care mission.

Sharyn Alfonsi: The criticism is that it’s pay-to-play, governor.

Sharyn Alfonsi: Well, I— I was just—

Ron DeSantis: And, so, it’s clearly not.

The full back-and-forth is available here, starting shortly after the 32-minute mark.  That context really lays out the profoundly responsible, sensible, and smart decision-making process.  Notice how CBS snipped out the nugget about Palm Beach officials telling the governor that 90 percent of their seniors live within 1.5 miles of a Publix location, but kept in Alfonsi's apparent attempt to give an example of some people living 30 miles away from their closest store.  It's undoubtedly true that there isn't any chain with franchises around every corner in Florida, so the best determination has to be made for the safety and convenience for as many people as possible.  Based on the statistic 60 Minutes omitted, Publix was -- once again -- the obvious choice.  And that '90 percent' statistic would have cut against Alfonsi's lame "gotcha," so it was sliced out of the package.  Leah also mentioned that the 60 Minutes narrative was blasted by two key players beyond the governor.  Publix:

“The irresponsible suggestion that there was a connection between campaign contributions made to Governor DeSantis and our willingness to join other pharmacies in support of the state’s vaccine distribution efforts is absolutely false and offensive. We are proud of our pharmacy associates for administering more than 1.5 million doses of vaccine to date and for joining other retailers in Alabama, Florida, Georgia, South Carolina, Tennessee and Virginia to do our part to help our communities emerge from the pandemic.”

And here is a powerful denial from a statewide Democratic official (a Biden supporter) in charge of Florida's emergency management, who is obviously exhausted by his own party's garbage conspiracies, amplified by the media:

@60Minutes I said this before and I’ll say it again. @Publix was recommended by @FLSERT and @HealthyFla as the other pharmacies were not ready to start. Period! Full Stop! No one from the Governors office suggested Publix. It’s just absolute malarkey. https://t.co/obkqYcbrzt

Florida's Division of Emergency Management and Department of Health recommended Publix for this contract because the chain was uniquely prepared and situated to carry out the mission.  And they've done so.  Very well. Note well that Moskowitz is re-upping his fact-check from more than a month ago, March 2, when he'd previously tackled the same baseless narrative.  Also note that two national pharmacies, CVS and Walgreens, were also contracted for nursing home vaccinations.  Were those assignments also made based on political dollars?  Seems doubtful, given both companies' contributions skewed Democratic in 2020.  How did this hit job ever even make it to the air?  They've got nothing.  I asked a similar question about another anti-DeSantis hatchet job from Yahoo News last week, which utterly collapsed under even the faintest scrutiny.  These journalists clearly approached their stories with a hardcore viewpoint about what the story should be, then sprinted toward their bias, irrespective of any facts.  It's abundantly clear that the Left, including most journalists, are scared that DeSantis is emerging as a threat to their power, and they'd therefore much rather train their fire on him -- no matter the substantive basis, or lack thereof -- than politicians they prefer, but who actually deserve searing criticism and accountability.  I'll leave you with this, which seems relevant:

Trust in media by party. pic.twitter.com/wPr3lMdRug

The only Americans who trust the media are the media's fellow Democrats.

UPDATE - 60 Minutes must retract the story and apologize:

Oh boy. Democrat mayor of Palm Beach County says 60 Minutes' "reporting was not just based on bad information -- it was intentionally false." Says he offered to refute 60 Minutes' half-cooked conspiracy theory based on personal knowledge and "60 Minutes declined." pic.twitter.com/yJ9aRa6RMy