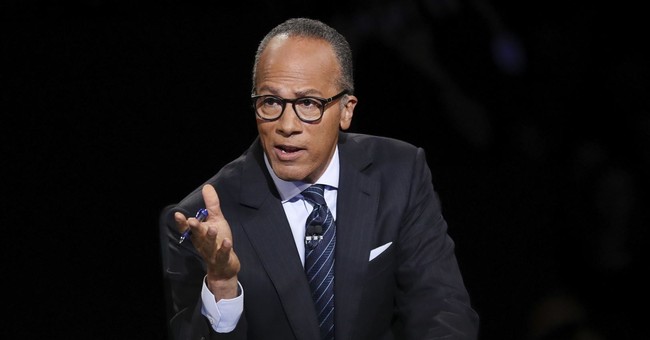 NBC News’s Lester Holt has some ideas about the media industry that only leftists are cheering about. While accepting an award at the 45th Murrow Symposium, Holt said these days it’s not necessary to present both sides to an issue.

"I think it’s become clear that fairness is overrated ... the idea that we should always give two sides equal weight and merit does not reflect the world we find ourselves in," he said, asking viewers to let him explain further before “tweeting that headline.”

“The idea that we should always give two sides equal weight and merit does not reflect the world we find ourselves in,” he continued, giving the example of the sun setting in the West. Where facts are settled there doesn’t need to be an alternative viewpoint presented, he argued.

“Decisions to not give unsupported arguments equal time are not a dereliction of journalistic responsibility or some kind of agenda, in fact, it’s just the opposite,” he said, noting that giving a platform to misinformation can be “quite dangerous.”

Clearly no one commenting actually watched the video including the daily caller. Lester holt is right. We don’t need to give a microphone to people to spread dangerous lies and falsehoods. Journalism is about reporting facts and holding leaders accountable. https://t.co/2oeJ2ARS67

Gotta love and appreciate Lester Holt. Congrats to one of the greatest! https://t.co/BEqTpAabfM

"In a better world in which the mainstream major media had a history of fairness and non-partisanship, Holt's point that journalism inherently involves filtering information might make sense. This is not such a better world, this is a world in which the mainstream major media wears its partisanship on its sleeve, manipulating the news cycle to the advantage of Democrats," he said. "In the real world, Holt's advice simply justifies media political bias."