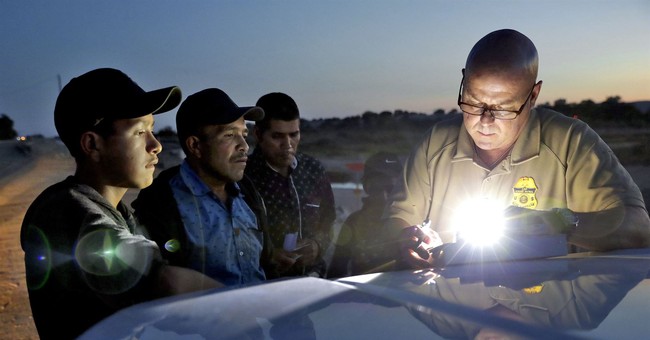 The situation at the Southern border is growing worse by the day. Now, overwhelmed Border Patrol agents in the Rio Grande Valley Sector are processing and releasing illegal immigrants who claim asylum without even scheduling a court date—a process that can take hours.

In what’s being reported as an “unprecedented move," the responsibility for seeking an asylum hearing now falls to the illegal border crosser.

Republican Rep. Lauren Boebert argued “this is the very definition of an ‘open border.’

Multiple Border Patrol agents confirmed the new process to Fox News, revealing that they have been directed to use prosecutorial discretion (PD) to forgo the hours-long process of paperwork required to issue an NTA amid the surge of migrants at the border.

Instead, migrants are registered into the system with biometrical data taken and largely released into the public - in one instance - at a bus station in McAllen, TX. The processing is being done mostly at a temporary outdoor processing site. Border Patrol agents emphasized that this does not apply to unaccompanied children.

A senior source with Customs and Border Protection (CBP) told Fox News on Saturday that officials were considering the controversial move because the ongoing crisis on the border has "become so dire that BP [Border Patrol] has no choice but to release people nearly immediately after apprehension because there is no space to hold people even to do necessary NTA paperwork." (Fox News)

Last week, Department of Homeland Security Secretary Alejandro Mayorkas insisted the border is "secure" and is "not open." But House Republicans are demanding answers.

Is this what @SecMayorkas considers a “secure and closed” border? This is an outrage and only incentivizes illegal immigration at the southwest border. It’s time for @SecMayorkas to start answering our questions.https://t.co/3bLMxym1yW

Meanwhile, President Biden still has no plans to visit the border though he told reporters this weekend that he will “at some point.” Asked if he wanted to get a “firsthand” look at what’s happening inside the migrant facilities, he replied, “I know what’s going on in those facilities.”