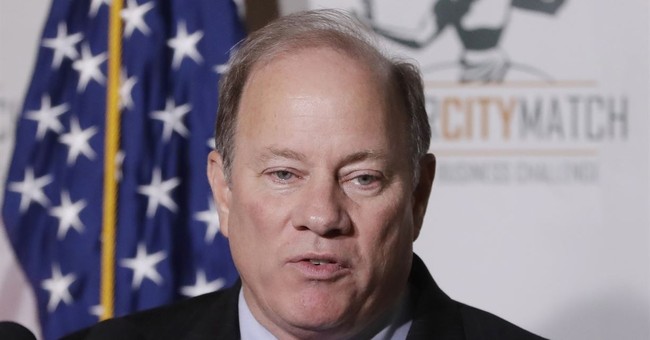 Detroit Mayor Mike Duggan (D) took a different tone towards the Johnson & Johnson COVID-19 vaccine on Friday after receiving backlash for declining a shipment of 6,200 doses of J&J’s vaccine.

In a press conference on Thursday, Duggan argued the Pfizer and Moderna vaccines are better and he wants residents to have “the best.”

“Johnson & Johnson is a very good vaccine. Moderna and Pfizer are the best. And I am going to do everything I can to make sure the residents of the city of Detroit get the best," he said.

Duggan noted that Detroit received enough doses of Pfizer and Moderna’s vaccines to inoculate all eligible residents so far who wanted one.

“Johnson & Johnson has many distinct advantages, too, including being one shot and so, people who don't like needles, people who don't want the inconvenience of coming back for a second shot, people who want to be fully vaccinated sooner, there is a real advantage for them,” she said. “And so, it's really inexplicable and I think irresponsible for Mayor Duggan and for others who are making that kind of decision to turn down a safe and highly effective vaccine."

There are real advantages to the Johnson & Johnson #vaccine that we should discuss:
1) Convenience (not having to come back for 2nd shot)
2) Faster to reach full immunity
3) Good for people scared of needles
4) Possibly less severe side effectshttps://t.co/yxaAAadF6e

“That was a sadly ignorant comment by the Detroit mayor,” Reiner said.

“The only number that people need to know about the J&J vaccine is 100. It’s 100 percent effective in that clinical trial in preventing hospitalization and death,” he continued. “To have the mayor really throw shade on this vaccine is really very unproductive at best.”

In an article published Friday in The Conversation, an academic journal, authors including Tinglong Dai, an associate professor in the Johns Hopkins Carey School of Business and an expert in medical supply chain issues, said the Johnson & Johnson vaccine could be a "game changer" since it does not need to be frozen and requires only one dose.  [...]

But the clinical trials for the two-dose vaccines took place before the arrival of variants of the SARS-CoV-2 virus.

After the criticism, including a discussion with the White House, Duggan said he had "full confidence" in J&J's vaccine and that the city is "making plans now for Johnson & Johnson to be a key part of our expansion of vaccine centers and are looking forward to receiving Johnson & Johnson vaccines in the next allocation.”