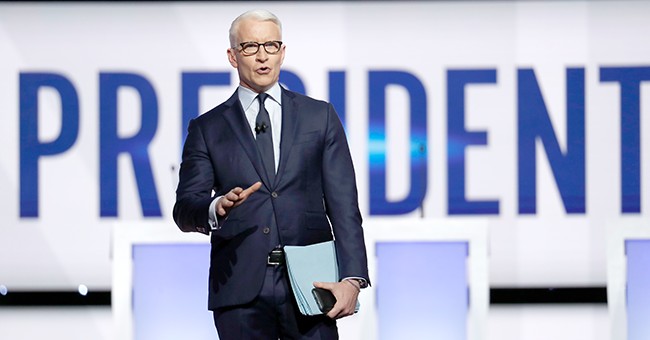 CNN anchor Anderson Cooper put his elitism on full display this week in his coverage of the U.S. Capitol riots, mocking pro-Trump protesters for where they may be dining and sleeping after the demonstration.

"Look at them, they’re high-fiving each other for this deplorable display of completely unpatriotic, completely against law and order, completely unconstitutional behavior, it’s stunning," he said. "And they’re going to go back, you know, to the Olive Garden and to the Holiday Inn they’re staying at, and the Garden Marriott, and they’re going to have some drinks and they're going to talk about the great day they had in Washington.”

He continued: “They stood up for nothing other than mayhem."

As Dave Rubin pointed out, Cooper is worth tens of millions. Others called him out for his classism.

Anderson Cooper makes about 12 million a year and is worth around 100 million dollars. Listen to what he says here.

They just can’t stop themselves.

If your political candidate or party is not that of @andersoncooper, @JeffZuckerCNN, @CNN, @CNNPolitics, @cnnbrk then you must eat at Olive Gardens and stay at Holiday Inns. Many of us do both. Andy, we aren’t Vanderbilt or live in the Vanderbilt Tower. You support classism. pic.twitter.com/GcibCJzeLJ

@AC360 did you really say that rioters will go back to their @olivegarden and @HolidayInn? Millions of Americans who would never participate in a riot go to those places. What a horrible classist thing to say.

@andersoncooper is a terrific guy but his crack about Trump supporters now slinking back to eat at Olive Garden and stay at the Marriott Courtyard is why they hate elitist Democrats.

@andersoncooper is an heir of one of America’s richest families who hasn’t a sliver of an idea of what it means to be an average person and instead of simply condemning the absolute thuggery that occurred yesterday needed to show his disdain and disgust for the working class.

Fox News hosts Tucker Carlson and Sean Hannity came to the defense of the establishments Cooper sought to denigrate.

“Last night, fake Jake’s [Tapper] colleague, the ever-so prestigious Anderson Cooper had his own grievances,” Hannity said. “According to Anderson, the real horror from yesterday’s chaos is that some of the pro-Trump protesters will go back and celebrate at an Olive Garden and to spend the night at a Holiday Inn.”

Hannity said he “happen[s] to love the Olive Garden.”

Carlson said his producer ordered Olive Garden for their entire staff that day.

Update: Cooper responded after backlash, acknowledging what he said came off the wrong way.

"Celebrating the criminal act they had taken part in. I was trying to remark about the seeming casualness of the behavior that we were all witnessing at that moment after the attack. The high-fiving, the laughing, the celebratory atmosphere, as if they had actually accomplished something," he said, clarifying that he is not too "fancy" to eat at Olive Garden.

"Just for the record, I like the Olive Garden. I like the artichoke dip even though it has spinach it in it, which I hate. Yes, I know, it’s an appetizer with breadsticks. It’s like a whole meal."