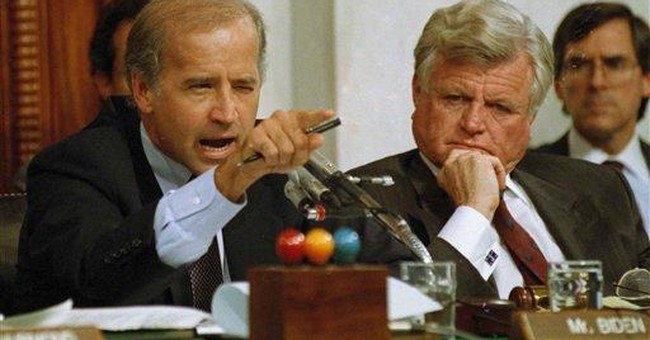 Democratic presidential nominee Joe Biden continues to avoid answering whether or not he would pack the Supreme Court as president if Judge Amy Coney Barrett is confirmed. Biden went so far as to say Americans don’t deserve to know his position until after the election.

While people like Fox News’s Chris Wallace say they “don’t understand” Biden’s response, Vice President Mike Pence clarified things for the American people during the VP debate: “if you haven’t figured it out yet, the straight answer is they are going to pack the Supreme Court if they somehow win this election.”

Decades ago, however, Biden was much more clear about his view on court packing.

Amid a move by President Reagan to replace three members of the U.S. Commission on Civil Rights, then Sen. Biden argued that while the president was “within his right to do” so, it threatened the credibility of the commission, comparing it to FDR’s attempt in 1937 to pack the Supreme Court.

“President Roosevelt clearly had the right to send to the United States Senate and the United States Congress a proposal to pack the court,” Biden said in July 1983. “It was totally within his right to do that. He violated no law. He was legalistically, absolutely correct. But it was a bonehead idea. It was a terrible, terrible mistake to make. And it put in question, if for an entire decade, the independence of the most-significant body … in this country, the Supreme Court of the United States of America.”

Who is this senator tripping idea of packing the court?https://t.co/ata5uRatw8

In 2005, Biden made similar remarks, calling the idea of court packing a "power grab" during a Senate speech.

Biden refers to court packing a "power grab" in 2005: pic.twitter.com/AhQWp1a8F3