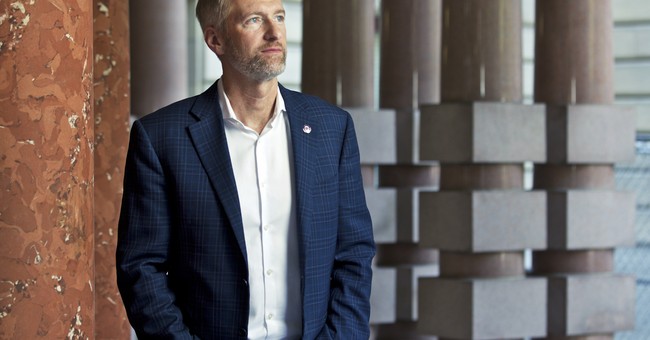 Portland Mayor Ted Wheeler blasted federal agents Wednesday after being tear gassed in a crowd of demonstrators, calling its use an “egregious overreaction” and “flat-out urban warfare.”

He claimed he saw nothing to "provoke" such a response, despite rioters setting fire to the federal courthouse and launching explosives at the officers.

Be a shame if this video exposing Ted Wheeler went viral. Please do not RT. pic.twitter.com/ZvU6qRo1YP

"I want to thank the thousands of you who have come out to oppose the Trump administration's occupation of this city," Wheeler told a crowd near the federal courthouse prior to the use of tear gas. "The reason this is important is it is not just happening in Portland ... we're on the front line here in Portland."

Despite trying to appear on their side, Wheeler was met with an angry response when he told demonstrators he would not commit to abolishing the police, with some telling him to “Get the f*** out” and others shouting “your house next.”

Shortly after midnight Portland police declared a riot. "Disperse to the north and/or west. Disperse immediately. Failure to adhere to this order may subject you to arrest or citation, or riot control agents, including, but not limited to, tear gas and/or impact weapons," the department said in a statement on Twitter.

A riot has been declared outside the Justice Center. Disperse to the north and/or west. Disperse immediately. Failure to adhere to this order may subject you to arrest or citation, or riot control agents, including, but not limited to, tear gas and/or impact weapons.

As Wheeler retreated, demonstrators followed him, pushing up on his security detail and throwing water bottles among other objects at the doors.

Portland mayor @tedwheeler is escorted to safety by his security team. Angry protesters follow and try to assault him despite his support on the front lines of the riot. They try to go inside the building but is pushed back by Wheeler’s security. pic.twitter.com/xUydADlJEv