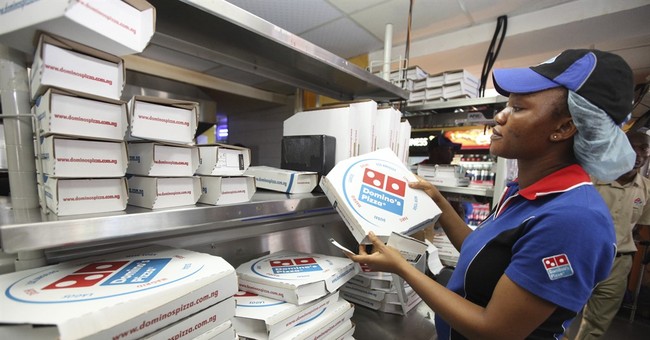 The outrage mob has turned on Domino’s Pizza after an eight-year-old tweet that involved White House Press Secretary Kayleigh McEnany was dredged up that shows nothing more than the company thanking her for a compliment.

“FUN FACT: @dominos is wayyyy better than any NYC pizza,” McEnany tweeted on Nov. 8, 2012, long before she was a public figure. “@kayleighmcenany That’s one heck of a compliment! Thanks for the love! #WEAPPRECIATEIT!” the company responded.

My understanding is that the owner of Dominos is a devout Catholic who donates significant sums of money to pro-life causes. I doubt this is new behavior, sadly.

I don’t eat Domino’s anyway but this is going to turn a lot of people off now. @pizzahut better be smart about all of this!

Fortunately, the sane voices left on Twitter weighed in to point out how pathetic these people are.

Anyone trying to cancel Dominos or saying they’re not ordering it anymore because of it is insane and wasn’t going to order Dominos anyways.

People are trying to cancel Domino's because 8 years ago Kayleigh McEnany, who was unknown and in college at the time, tweeted them a compliment about their pizza and they said thank you.

Meanwhile Dominos is trending over an 8 year old tweet because people are dumb and dumb people only like to talk about dumb things and refuse to discuss issues of substance.

People trying to cancel Dominos because of this tweet is everything that is wrong with 2020.#dominos pic.twitter.com/z5ZidxBgug

McEnany responded to the "drama" by expressing her love for Domino's and other fast food chains.

.@kayleighmcenany I can’t wait until the Radical Left finds out about your love for @tacobell ?? ?? ?? ?????? #Triggered https://t.co/TsWOuQEaOP