Graham Makes a Prediction About Witnesses Democrats Won't Like 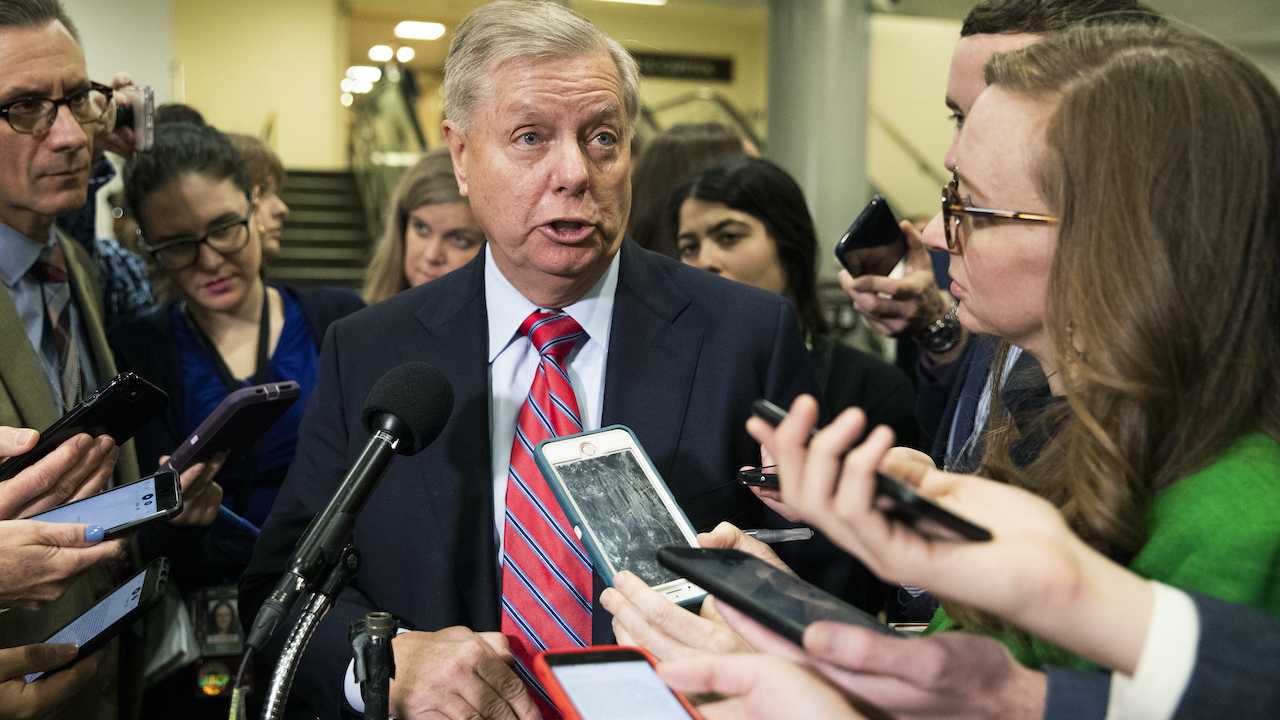 Sen. Lindsey Graham made a prediction Tuesday that if witnesses are called and Democrats bring in John Bolton, they should be ready for Republicans to call Joe Biden and his son, Hunter.

“If we’re going to open this up to additional inquiry, we’re going to go down the road,” he told reporters. “Was it legitimate for the president to believe there was corruption and conflicts of interest on the Bidens’ part in the Ukraine? We’ll explore that and whether or not there’s any credibility to the idea that the DNC may have been working with Ukraine.”

The South Carolina senator explained that he doesn’t need to hear from additional witnesses, but those who believe calling witnesses can be done “surgically” are mistaken.

“I’m just telling everybody who thinks you can surgically deal with this: it’s not going to happen,” he said. “I’ll make a prediction. There’ll be 51 Republican votes to call Hunter Biden, Joe Biden, the whistleblower and the DNC staffer at a very minimum.”

Sen. @LindseyGrahamSC on witnesses: "I'll make a prediction; they'll be 51 Republican votes to call Hunter Biden, Joe Biden, the whistleblower and the DNC staffer at a very minimum." pic.twitter.com/jpoJIfzg7k

Democrats renewed their calls this week for Bolton to testify in the impeachment trial. The latest effort comes after The New York Times published a report on the former national security adviser's allegations in his forthcoming book that Trump tied Ukraine aid to officials helping investigate the Bidens.

Graham's full remarks are below:

GRAHAM: Here’s where I am on witnesses. I’m ready to make my decision based on the record established in the House. The House chose to pursue witnesses that were available to them. I don’t want to start a precedent of just doing it half-assed in the House and expecting the Senate to fix it.

I think the New York Times story…I have no idea what they are talking about…Senator Lanford suggested making the manuscript available in a classified setting to let senators go read it for themselves. That sounds like a reasonable solution to me. However, if people want witnesses, we’re going to get a lot of witnesses. This idea of calling one-and-one makes zero sense to me.

What I would say is that there is not a scintilla of evidence that the Biden’s connection to the Ukraine is inappropriate. There is a tsunami of evidence. So the House managers told the Senate that this is ‘baseless’ that it’s been ‘debunked,’ and I think the defense team, yesterday, made a damning indictment of what Hunter and Joe Biden allowed to happen and it’s not in America’s interest to see this happen again in the Ukraine where Hunter Biden turned it basically into an ATM machine. We’re going to go to that, and there’s media reports, people in your business, that suggested a DNC staffer [Alexandra Chalupa] met with Ukrainian officials about the 2016 election. I don’t know if that’s true or not, but if we’re going to open this up to additional inquiry, we’re going to go down the road of whether it was legitimate for the President to believe there was corruption and conflicts of interest on the Biden’s part in the Ukraine. We’ll explore that, and whether or not there is any credibility to the idea that the DNC may have been working with the Ukraine.

REPORTER: What is your vote going to be on that opening question of whether there should be witnesses…

GRAHAM: I’ll let you know Friday, but right now I feel comfortable to the idea I have enough and I’m just telling everybody who thinks you can surgically deal with this, it’s not going to happen. I’ll make a prediction. There will be 51 Republican votes to call Hunter Biden, Joe Biden, the whistleblower, and the DNC staffer, at a very minimum.

REPORTER: [garbled] you’ve said that aid conditioned on the investigation of Biden would be wrong…

GRAHAM: I’ve said, basically, what they’ve proved to me is it would have been wrong for President Trump not to raise this issue. You have to be willfully blind and say Democratic misconduct doesn’t matter to you not to believe that the President had a good reason to ask the Ukraine to look into the Biden affair. He had media reports right before the July 25th meeting. As much as I like Joe Biden, he needs to answer questions of why he allowed his one to continue to receive millions of dollars from Burisma when he should have known it was a conflict of interest. If a Republican had been in that same situation, you’d be all over all of us wanting to know why we’re not calling these people as witnesses. So, as much as I like Joe Biden, he has to answer for his time a the leader of anti-corruption efforts in the Ukraine.