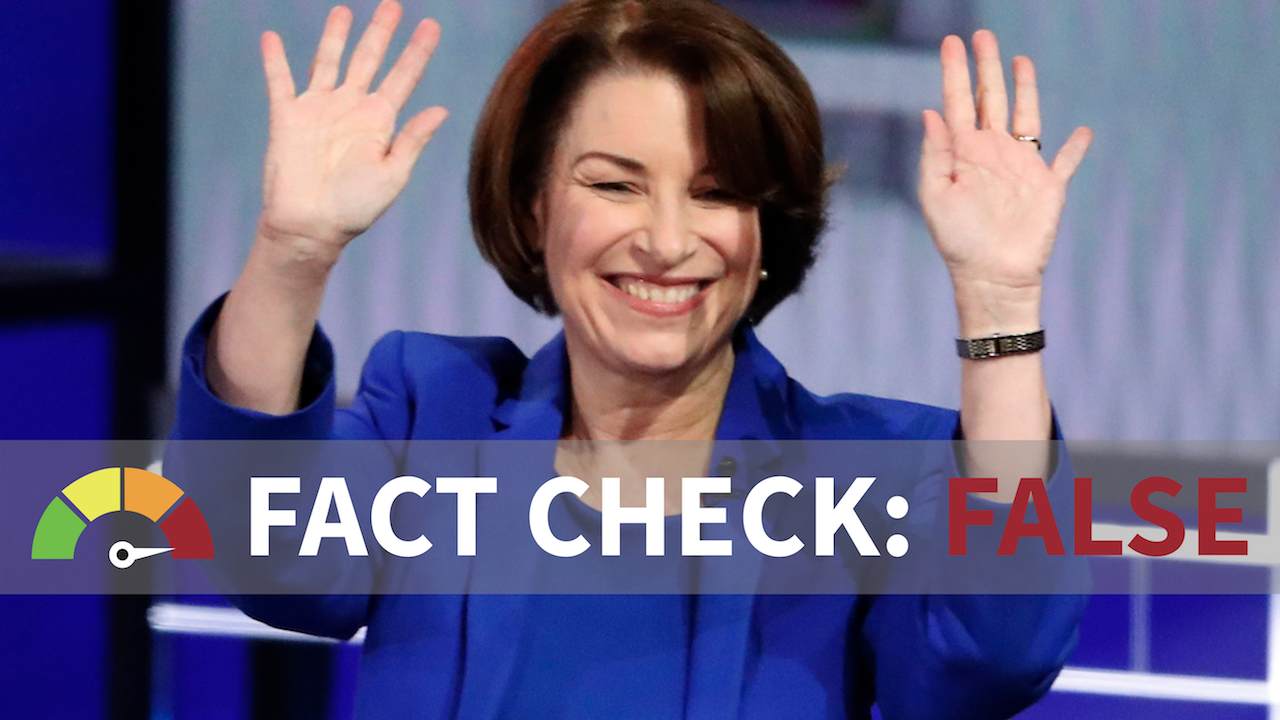 Here was the question from the debate and the senator's response:

MODERATOR: Many states, including right here where we are tonight in Georgia, have passed laws that severely limit or outright ban abortion. Right now, Roe v. Wade protects a woman’s right to abortion nationwide. But if Roe gets overturned and abortion access disappears in some states, would you intervene as president to try to bring that access back, Senator Klobuchar?

AMY KLOBUCHAR: Of course. We should codify Roe v. Wade into law. That’s what we should do. And this president indicated early on what he was going to do, and he’s done it. When he was running for office, he literally said women should go to jail, and then he dialed it back and said doctors should go to jail. So no surprise we’re seeing these kinds of laws in Georgia, in Alabama, where his allies are passing these bills. And what we have to remember is that the people are with us. And I predict this will be a big issue in the general election. And I just can’t wait to stand across from Donald Trump and say this to him: “You know what? The people are with us.” Over 70 percent of the people support Roe v. Wade. Over 90 percent of the people support funding for Planned Parenthood and making sure that women can get the health care they need. He is off the track on this, and he will hear from the women of America, and this is how we’re going to win this election.

Klobuchar’s assertion that over 70 percent of Americans support Roe v. Wade appears to come from a June NPR/PBS NewsHour/Marist Poll that showed 77 percent of respondents saying the Supreme Court should uphold the 1973 ruling. But the truth about the abortion question is much more complicated than that.

Even though Americans are solidly against overturning Roe, a majority would also like to see abortion restricted in various ways. In a separate question, respondents were asked which of six choices comes closest to their view of abortion policy.

Eighteen percent said abortion should be available to a woman any time she wants during her entire pregnancy. At the other end of the spectrum, 9% said it should never be permitted under any circumstance. (NPR)

In other words, 70 percent of Americans are in favor of legal restrictions on abortion or an outright ban, according to this poll.

Poll: 70% of voters favor limiting legalized abortion to rare cases (life of mother/rape/incest) or the first trimester of pregnancy.

Framing these stances as "extreme" is an abortion lobby talking point, prevalent in many mainstream newsrooms.https://t.co/S0ndLokEk3

A poll conducted by the Morning Consult research firm finds most Americans want abortions to be made illegal either in all cases or in very rare cases such as rape or incest or win the pregnancy directly threatens the life of the mother. Those cases constitute less than 2 or 3% of all abortions, meaning that most Americans support making virtually all abortions illegal.

That entire subset of voters constitutes 61% of Americans taking a pro-life position against abortion while only 27% of Americans believe that abortion should be illegal only after the baby can survive outside the womb and another 12% did not know where they stood on abortions. (Life News)

Other surveys, such as Gallup’s most recent poll on the issue, find that a plurality of voters identify as pro-life, with 49 percent of Americans labeling themselves as such, while 46 percent said they were “pro-choice.”

As for Klobuchar's claim that 90 percent of Americans support funding Planned Parenthood, there are no surveys to support that figure. Two 2017 surveys from Quinnipiac and the Kaiser Family Foundation show strong opposition to cutting federal funds to Planned Parenthood, but as National Review points out, both surveys are deeply flawed.

Quinnipiac released a new poll on the House GOP’s health-care-reform bill, the American Health Care Act (AHCA). The poll shows that 61 percent of respondents oppose cutting off federal funds to Planned Parenthood. After respondent were told that this funding “was being used only for non-abortion health issues such as breast cancer screening,” opposition to defunding Planned Parenthood increased to 80 percent. The poll has already received coverage from a number of media outlets including Politico, Fortune, Time and CNBC.com.

Unfortunately, both this Quinnipiac poll and a Kaiser Family Foundation poll released last week contain many of the same flaws. Neither poll mentions Planned Parenthood’s numerous legal and ethical troubles — specifically the group’s mishandling of Medicaid funds and its willingness to help minors circumvent parental-involvement laws. Neither poll mentions that money is fungible, meaning that the half a billion federal dollars flowing to Planned Parenthood each year still indirectly subsidize abortion. Finally, and most importantly, both polls misstate what the AHCA and other defunding bills would actually do. Proposed legislation would not merely defund Planned Parenthood; it would also reallocate that funding to over 10,000 federally qualified health centers (FQHCs), which offer comprehensive health services to over 24 million people a year, 14 million of whom are women. (This map illustrates how drastically community clinics outnumber Planned Parenthoods, by a ratio of 20 to one.) (National Review)

In sum, Americans do not support Democrats' extreme abortion positions, and Klobuchar was wrong to suggest otherwise on the debate stage.