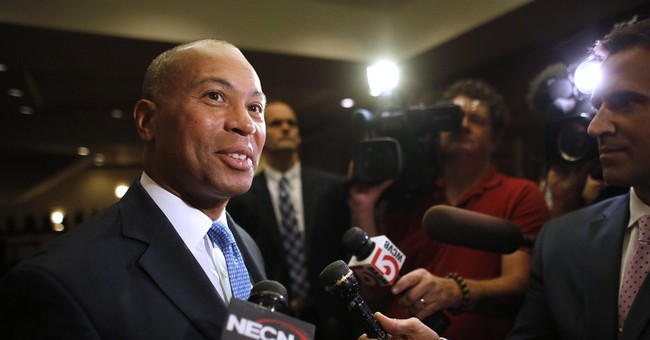 Democratic field continues to expand, with former Governor of Massachusetts Deval Patrick announcing Thursday morning that he is jumping into the race for president.

"I admire and respect the candidates in the Democratic field that bring a richness of ideas and experience and a depth of character that makes me proud to be a Democrat," Patrick said. "But if the character of the candidates is an issue in every election, this time is about the character of the country. So in the spirit of profound gratitude for all the country has given to me, with a determination to build a better, more sustainable, more inclusive American dream for the next generation, I am today announcing my candidacy for president of the United States."

In a spirit of profound gratitude for all the country has given to me, with a determination to build a better, more sustainable, more inclusive American Dream for everyone:

I am today announcing my candidacy for President of the United States.https://t.co/hObdLNiFMJ pic.twitter.com/fGmI0qxkxS

Patrick is expected to travel to New Hampshire on Thursday to file for the state's presidential primary, as Friday is the last day for candidates to get their names on the ballot.

Patrick's campaign is likely to face high hurdles, including fundraising, a lack of national name recognition and entering the race extremely late in the election cycle. His move comes with less than three months to go until Iowa and New Hampshire kick off the presidential nominating calendar.

Patrick served as U.S. Assistant Attorney General for the Civil Rights Division from 1994-1997 under President Bill Clinton. He was elected governor of Massachusetts in 2006 and re-elected in 2010, the first black governor in the commonwealth's history.

After leaving office in 2015, Patrick took a job with Bain Capital, the Boston-based private investment firm that became a liability to Mitt Romney – Patrick’s predecessor as Massachusetts governor – during Romney’s 2012 presidential campaign. Patrick’s tenure at the firm would likely be in the spotlight if he enters the 2020 race. (Fox News)

“There’s already one Massachusetts elitist liberal running in the Democrat field, yet Deval Patrick must think she, nor any of the other candidates aren’t good enough," said RNC Spokesman Steve Guest. "Reminder: Patrick doesn’t stand a chance against President Trump either.”

Tucker Carlson Accosted By Hater in Montana Tackle Shop: 'You Are the Worst Human Being'
Townhall
The Dallas Democrats are collecting Dr Pepper and salsa for care packages to send to the Texas House Dems in D.C.
Twitchy
NYPD Brings a Reckoning on Leftists Who Seize Property and Call Them 'Slavecatchers'
Redstate
The World Has Had It With China Flu Lockdowns: Protests Rock Cities All Over the Globe
PJ Media