Kurdish Forces Make Deal With Assad Government After US Withdrawal 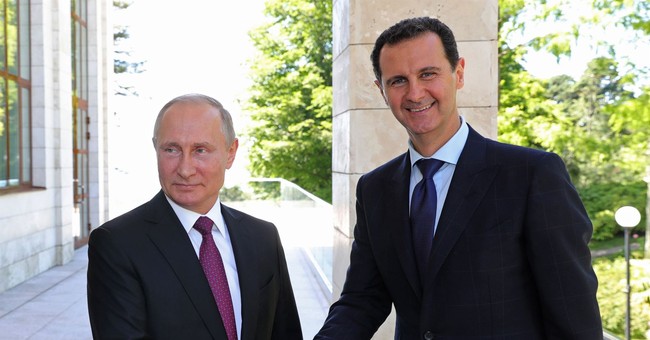 After President Trump announced the withdrawal of U.S. troops from northern Syria ahead of a Turkish invasion, the Kurds have chosen to make a deal with Russian-backed Damascus.

It was anticipated that the Kurdish forces, who were left with few options, would turn to the Assad government for support.

"An agreement has been reached with the Syrian government — whose duty it is to protect the country's borders and preserve Syrian sovereignty — for the Syrian Army to enter and deploy along the Syrian-Turkish border to help the SDF stop this aggression" by Turkey, said an SDF statement.

The SDF’s commander in chief explained in an op-ed in Foreign Policy on Sunday that if they were forced to choose between compromise and genocide they would pick the former.

“We believe in democracy as a core concept, but in light of the invasion by Turkey and the existential threat its attack poses for our people, we may have to reconsider our alliances. The Russians and the Syrian regime have made proposals that could save the lives of millions of people who live under our protection. We do not trust their promises. To be honest, it is hard to know whom to trust,” Mazloum Abdi wrote.

“We know that we would have to make painful compromises with Moscow and Bashar al-Assad if we go down the road of working with them. But if we have to choose between compromises and the genocide of our people, we will surely choose life for our people,” he asserted.

The deal came after three days of negotiations between the Kurdish forces, Russian envoys and Damascus, according to The Washington Post.

The region has experienced chaos and bloodshed since the U.S. pulled out.

Over the past five days, Turkish troops and their allies have pushed their way into northern towns and villages, clashing with the Kurdish fighters over a stretch of 125 miles. The offensive has displaced at least 130,000 people.

On Sunday, at least nine people, including five civilians, were killed in Turkish airstrikes on a convoy in the Syrian border town of Ras al-Ayn, according to the Syrian Observatory for Human Rights and Syrian Kurdish officials.

President Trump's decision to essentially give Turkey a green light to advance on the country has been widely criticized as abandoning the Kurds, who were instrumental in the fight against ISIS in Syria. (Fox News)

Despite facing widespread backlash over his decision to pull troops from Syria, Trump has insisted it was the right move.

"Very smart not to be involved in the intense fighting along the Turkish Border, for a change," he tweeted Sunday. "Those that mistakenly got us into the Middle East Wars are still pushing to fight. They have no idea what a bad decision they have made."

Very smart not to be involved in the intense fighting along the Turkish Border, for a change. Those that mistakenly got us into the Middle East Wars are still pushing to fight. They have no idea what a bad decision they have made. Why are they not asking for a Declaration of War?

Trump has vowed to support sanctions against Turkey.

Dealing with @LindseyGrahamSC and many members of Congress, including Democrats, about imposing powerful Sanctions on Turkey. Treasury is ready to go, additional legislation may be sought. There is great consensus on this. Turkey has asked that it not be done. Stay tuned!