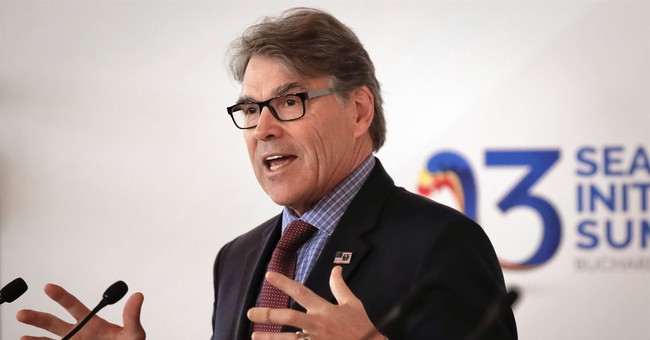 Energy Secretary Rick Perry addressed recent reports that he was planning to resign in November, saying it’s a rumor that’s been going around for months.

“No. I’m here, I’m serving," Perry said at a news conference in Vilnius, Lithuania, Politico reported. “They’ve been writing the story for at least nine months now. One of these days they will probably get it right, but it’s not today, it’s not tomorrow, it’s not next month."

Politico broke the most recent iteration of the story last week, citing three unnamed sources, who all denied his plans had anything to do with his involvement in Ukraine.

A spokesperson denied the report at the time.

“While the beltway media has breathlessly reported on rumors of Secretary Perry's departure for months, he is still the Secretary of Energy and a proud member of President Trump’s Cabinet,” spokeswoman Shaylyn Haynes said in a statement. “One day the media will be right. Today is not that day.”

Axios reported on Saturday that Trump told House Republicans he made the July call to Ukrainian President Volodymyr Zelensky at Perry's request.

Perry confirmed that he asked Trump to call Zelensky, but said it only concerned the country’s developing energy sector—not the Biden family.

“Absolutely, I asked the president multiple times, ‘Mr. President, we think it is in the United States’ and in Ukraine’s best interest that you and the president of Ukraine have conversations, that you discuss the options that are there,’” Perry said, recalling his conversations with Trump.