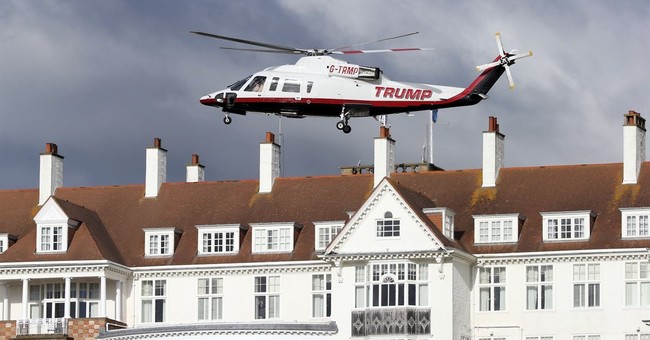 Any time a government or military official stays at a Trump-owned hotel, get ready for the media and Democratic politicians to completely meltdown—regardless of the circumstances.

While last week was dominated by criticism of Vice President Mike Pence staying at a Trump property in Ireland, this weekend, all eyes turned to reports that an Air National Guard crew stopped at Trump’s Turnberry resort in Scotland on their way to bringing medical supplies to Kuwait.

The Politico report argues that crews on previous trips to the Middle East have stopped at U.S. air bases in other countries where refueling would cost less than at a commercial airport.

According to a letter the panel sent to the Pentagon in June, the military has spent $11 million on fuel at the Prestwick Airport — the closest airport to Trump Turnberry — since October 2017, fuel that would be cheaper if purchased at a U.S. military base. The letter also cites a Guardian report that the airport provided cut-rate rooms and free rounds of golf at Turnberry for U.S. military members.

Taken together, the incidents raise the possibility that the military has helped keep Trump’s Turnberry resort afloat — the property lost $4.5 million in 2017, but revenue went up $3 million in 2018. […]

On previous trips to the Middle East, the C-17 had landed at U.S. air bases such as Ramstein Air Base in Germany or Naval Station Rota in Spain to refuel, according to one person familiar with the trips. Occasionally the plane stopped in the Azores and once in Sigonella, Italy, both of which have U.S. military sites, the person added. (Politico)

It didn’t take long for the Air Force to respond to the story, completely disputing accusations that "an Air Force mission may have helped line the president’s pockets."

Military flights making stopovers in Scotland are not unusual, and there were no rooms closer to the airport, an Air Force spokesman said Saturday in an emailed statement to The Associated Press.

“As our aircrews serve on these international airlift missions, they follow strict guidelines on contracting for hotel accommodations and all expenditures of taxpayer dollars,” Brig Gen Edward Thomas wrote. “In this case, they made reservations through the Defense Travel System and used the closest available and least expensive accommodations to the airfield within the crews’ allowable hotel rates.” [...]

A local government contractor made the Scotland reservations, and indicated there was not a room closer to the airport than the Trump resort, 54 miles away, Thomas said.

That, Thomas said, was not a remarkable distance to travel to receive the government rate for the rooms.

He said the Trump resort had rooms for $136 a night, cheaper than a Marriott, which charged $161 a night. However, he said both are under the per diem rate of $166.

“While we are still reviewing the trip records, we have found nothing that falls outside the guidelines associated with selecting stopover airports on travel routes and hotel accommodations for crew rest,” said Thomas, the director of Air Force Public Affairs.

He said records are being reviewed, but it appears the crew stayed at a Marriott near Glasgow on its return trip to Alaska. (AP)

Now that their every move is being criticized, the Air Force is going to be reviewing their travel and lodging selections for international trips.

“U.S. Service members lodging at resort accommodations, even if within government rates, might be allowable but not advisable,” said Edwards, reports WSJ. “We are not only stewards of American tax dollars but we represent our nation as we travel abroad.”