Bolton Blasts NYT Over North Korea Story: 'There Should Be Consequences' 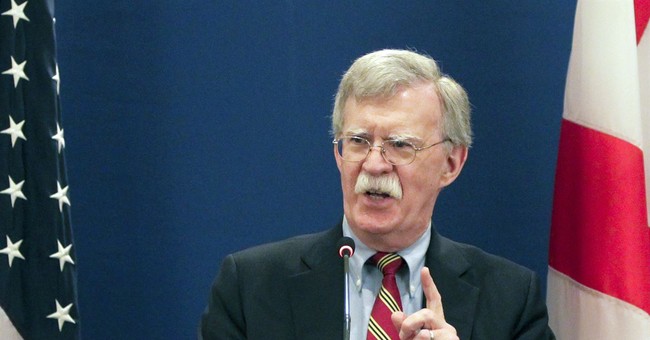 National security adivser John Bolton slammed The New York Times on Monday over its report that said the Trump administration would settle for a “nuclear freeze” with North Korea.

“I read this NYT story with curiosity,” Bolton tweeted. “Neither the NSC staff nor I have discussed or heard of any desire to 'settle for a nuclear freeze by NK.' This was a reprehensible attempt by someone to box in the President. There should be consequences.”

I read this NYT story with curiosity. Neither the NSC staff nor I have discussed or heard of any desire to “settle for a nuclear freeze by NK.” This was a reprehensible attempt by someone to box in the President. There should be consequences. https://t.co/TTRPQkksza

In the report, the Times says the nuclear freeze  “essentially enshrines the status quo, and tacitly accepts the North as a nuclear power, something administration officials have often said they would never stand for.”

It falls far short of Mr. Trump’s initial vow 30 months ago to solve the North Korea nuclear problem, but it might provide him with a retort to campaign-season critics who say the North Korean dictator has been playing the American president brilliantly by giving him the visuals he craves while holding back on real concessions.

While the approach could stop that arsenal from growing, it would not, at least in the near future, dismantle any existing weapons, variously estimated at 20 to 60. Nor would it limit the North’s missile capability.

The administration still insists in public and in private that its goals remain full denuclearization. But recognizing that its maximalist demand for the near-term surrender of Mr. Kim’s cherished nuclear program is going nowhere, it is weighing a new approach that would begin with a significant — but limited — first step. (NYT)

The Times describes that first step as getting North Korea to shut down its main nuclear fuel production site at Yongbyon in exchange for the most onerous sanctions against them being lifted. The report says Secretary of State Mike Pompeo and Bolton rejected this idea because a great deal of North Korea’s nuclear capabilities exist outside the Yongbyon complex.

“The idea now is to get Mr. Kim’s new negotiating team to agree to expand the definition of the Yongbyon site well beyond its physical boundaries,” the Times reports. “If successful — and there are many obstacles, including the North accepting intrusive, perhaps invasive inspections — it would effectively amount to a nuclear freeze that keeps North Korea from making new nuclear material.”

The report goes on to question whether Trump really cares about achieving denuclearization of North Korea or whether he is more interested in the appearance that he’s making progress with the rogue nation, presenting himself as a peacemaker to voters ahead of the 2020 election.