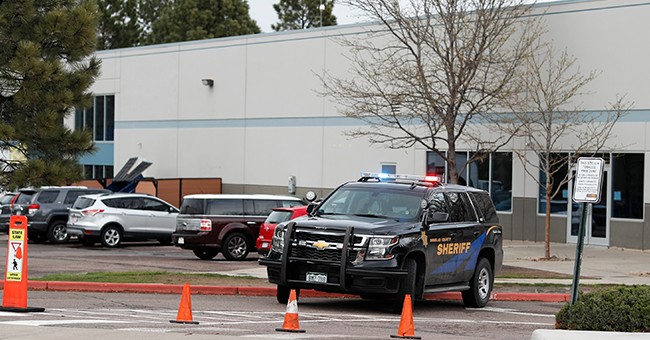 The two teens accused of shooting a classmate at a Colorado high school last week and injuring eight others were charged with murder and attempted murder on Wednesday, but Douglas County District Judge Theresa Slade has sealed the charges and entire case file, banning the public from viewing it.

One of the teens accused of shooting up the Science, Technology, Engineering and Math (STEM) charter school in Highlands Ranch, Colorado, on May 7 is transgender—Alec McKinney, 16, who identifies as a male but is listed as Maya Elizabeth McKinney on the court docket. The other, Devon Erickson, 18, expressed hatred for Christians on social media and appeared to be pro-Satan.

Car towed from #stemshooting suspect's home apparently has "F*** SOCIETY" spray painted on the side. Also "666" and a what looks like a pentagram sprayed on the hood. pic.twitter.com/e6QX3lq4v3

McKinney's father, Jose Evis Quintana, is reportedly a criminal illegal alien who was deported as recently as 2017.

Douglas County Sheriff’s Department also arrested Quintana in 2008 for kidnapping, menacing with a weapon, evading police in a car and driving without a valid license, Daily Mail reported. He was released on bail, however.

His criminal history includes a domestic violence offense against hairstylist Morgan Lynn McKinney and “menacing with a weapon” in 2009, according to Daily Mail. He was sentenced to 15 months of prison when all the charges, besides the charge against Morgan McKinney, were dropped. (Daily Caller)

According to reports, the motive was more than bullying, involving "revenge and anger towards other at the school." At least one of the suspects had been in therapy and had a history of legal and illegal drug use.

The school was asked five months ago by a school district official to investigate allegations of student bullying and violence by a parent who believed it could be the next Columbine. The school reportedly took the allegations seriously but found no evidence to support the claims.