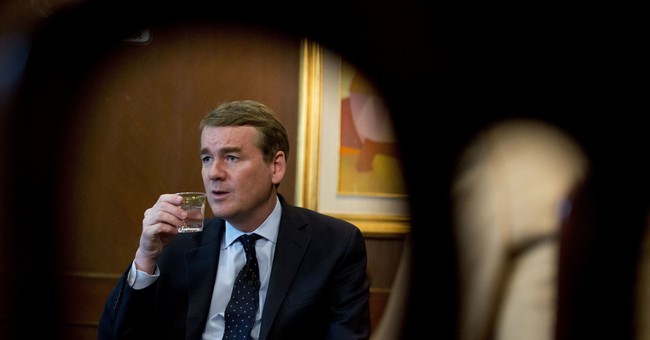 "My plan is to run for president," he said. "If we keep going down this road, we’re going to be the first generation of Americans to leave less opportunity, not more."

We cannot be the first generation to leave less to our kids, not more.

That’s why I’m running for President. Let’s build opportunity for every American and restore integrity to our government.

"If we keep going down this road, we’re going to be the first generation of Americans to leave less opportunity, not more." -- @SenatorBennethttps://t.co/X7ass6bczO pic.twitter.com/6IhnFxjnVo

Bennet said he would seek the Democratic nomination last month if he beat his prostate cancer diagnosis.

"The idea was to announce sometime in April," Bennet told the Colorado Independent. "That was the plan. We hired some staff. We interviewed people for positions in New Hampshire and Iowa. And then I went for the physical. In my last physical, my PSA was high. They did a biopsy, and it was clear. But this time, it was not clear."

He said the diagnosis didn’t change his plans.

"I'm looking forward to running in 2020," Bennet said later that week. "This obviously was unexpected. But we caught it early. It's something that I think we're going to be able to treat. And I don't think it should keep me off the trail."

Now that he had a successful surgery, he’s finalized his plans to run for president.

Bennet joins a crowded field of 21 other Democratic candidates.

RNC Communications Director Michael Ahrens said in a statement that Bennet is just another Democrat with no chance of winning.

“Michael Bennet is just another tax-and-spend liberal with no chance of becoming president,” he said. “Bennet hasn't gotten anything done after more than a decade in the Senate, and unfortunately for him, the ‘unknown, no-accomplishments lane’ of the Democratic primary is already full.”