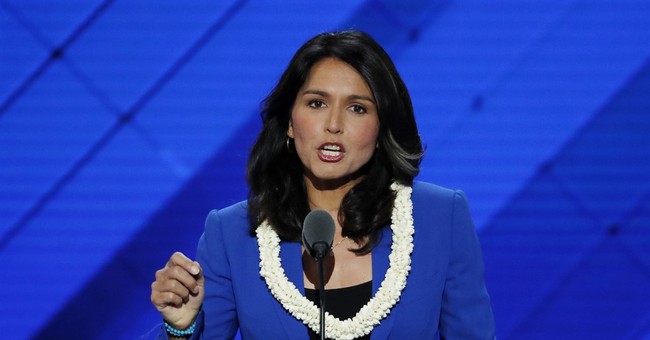 Democratic Rep. Tulsi Gabbard (Hawaii) called out senators from her own party in an op-ed Tuesday for their religious bigotry in opposing one of President Trump’s U.S. District Court picks over the fact that he belongs to the Catholic group Knights of Columbus.

While Gabbard opposes Brian C. Buescher for the U.S. District Court of Nebraska, her disapproval is not based on his affiliation with the religious group, like some of her Democratic colleagues.

“While I oppose the nomination of Brian Buescher to the U.S. District Court in Nebraska, I stand strongly against those who are fomenting religious bigotry, citing as disqualifiers Buescher’s Catholicism and his affiliation with the Knights of Columbus. If Buescher is 'unqualified' because of his Catholicism and affiliation with the Knights of Columbus, then President John F. Kennedy, and the 'liberal lion of the Senate' Ted Kennedy would have been 'unqualified' for the same reasons,” she wrote in an opinion piece published in The Hill. “Article 6 of the U.S. Constitution clearly states that there "shall be no religious test" for any seeking to serve in public office.”

Some Democratic senators, including Mazie Hirono (Hawaii) and Kamala Harris (Calif.) questioned whether Buescher’s membership in the Knights of Columbus would keep him from fairly judging matters and wanted to know whether he would quit.

Unfortunately this seems to be a trend among Democrats lately.

Gabbard referenced Sen. Dianne Feinstein’s notorious 2017 questioning of Amy Coney Barrett during her confirmation hearings to the U.S. Circuit Court when she told the judge that “the dogma lives loudly within you.”

Gabbard said in no uncertain terms that this type of questioning that’s been on display by some Senate Democrats is religious bigotry.

“Elected leaders engaging in religion-baiting are playing with fire. They are sacrificing the well-being, peace and harmony of our country to satisfy their own political ambitions for partisan political interests,” she said in conclusion.

“We must stand together, call out and reject religious bigotry no matter where it comes from, and fight to protect the freedoms and principles that bind us together as Americans.”