The Chinese Government Is Intensifying Crackdown on Christianity 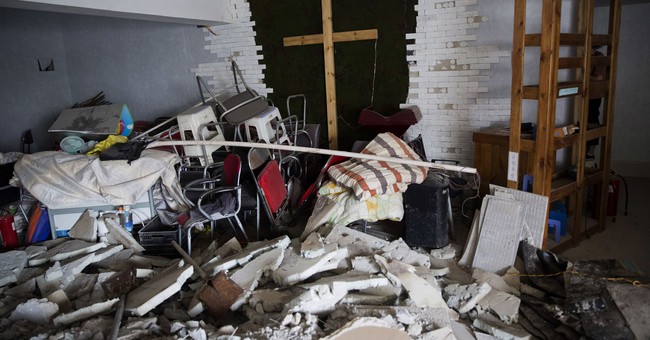 The Chinese government is cracking down on Christianity, destroying crosses, closing down churches, burning Bibles, and forcing believers to sign a paper renouncing their faith, the Associated Press reports based on accounts from pastors and a religious freedom monitoring group.

The move comes as the Chinese government attempts to demand loyalty to the state’s atheist Community Party.

“The international community should be alarmed and outraged for this blatant violation of freedom of religion and belief,” Bob Fu of the U.S.-based group China Aid told the AP.

#China CCP starts burning the Bible and crosses in Henan. Last time burning Bibles campaign happened in late 1960s by dictator Chairman Mao’s wife Jiang Qing in Shanghai. She was arrested in 1976 but Christians grew to millions. Will Never be successful??????,?????? pic.twitter.com/T5esv16NXI

Under President Xi Jinping, China’s most powerful leader since Mao Zedong, religious believers are seeing their freedoms shrink dramatically even as the country undergoes a religious revival. Experts and activists say that as he consolidates his power, Xi is waging the most severe systematic suppression of Christianity in the country since religious freedom was written into the Chinese constitution in 1982.

Fu also provided video footage of what appeared to be piles of burning bibles and forms stating that the signatories had renounced their Christian faith. He said that marked the first time since Mao’s radical 1966-1976 Cultural Revolution that Christians had been compelled to make such declarations, under pain of expulsion from school and the loss of welfare benefits.

A Christian pastor in the Henan city of Nanyang said crosses, bibles and furniture were burned during a raid on his church on Sept. 5. (AP)

One pastor, Ezra Jin Mingri, of the Zion church in Beijing said even his personal assets had been frozen by the government as a means of forcing him to comply before officials shut the church down Sunday.

Still, Jin said that will not deter followers.

“Churches will continue to develop. Blocking the sites will only intensify conflicts,” he told the AP.

Jay Sekulow, President Trump's attorney and Chief Counsel at the American Center for Law & Justice, said the ACLJ is addressing the persecution.

“The situation for Chinese #Christians becomes more dire by the day. We are working tirelessly to put maximum pressure on China stop the persecution,” he tweeted.

The situation for Chinese #Christians becomes more dire by the day. We are working tirelessly to put maximum pressure on China stop the persecution: https://t.co/Gtdos7f9WT pic.twitter.com/n7uGa8P6G0

The country has roughly 38 million Protestants—a number experts believe will grow in the coming decades, making it home to the world’s largest Christian population.