Menendez: Trump Would Never Have Criticized LeBron If He Were White 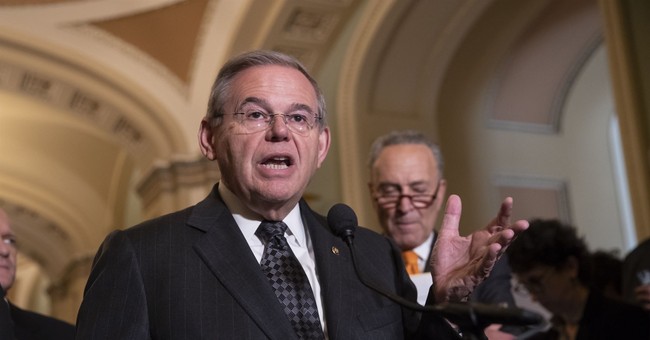 President Trump has hurled insults at just about every type of person out there—males, females, blacks, whites, Republicans, and Democrats alike. But Democratic Sen. Bob Menendez (NJ) is convinced that the president’s latest criticism of LeBron James and CNN’s Don Lemon is because he’s a racist.

“Let's just say it - if LeBron James was white, President Trump never would have questioned his intelligence or his charity work. How do I know? Let's check the history...” Menendez said, referring to Trump’s tweet over the weekend calling Lemon “the “dumbest man on television” who makes James “look smart, which isn’t easy to do.”

The New Jersey Democrat then posted a series of tweets accusing the president of making racist or offensive remarks.

In the 1970s, Trump was sued for not renting to African Americans at his properties... https://t.co/uzv64ddoRn

He couldn’t believe President Barack Obama could have possibly been accepted at Harvard and Columbia https://t.co/5xEmIcFiJE

He even suggested Obama release records to prove he was smart enough. https://t.co/DdIEkZ0YXM

There was all nine of these (and more) https://t.co/K7UmDI5O6D

And remember this? Referring to Haiti and African nations? Yeah. Pretty clear. https://t.co/0JuUqDSifL

And of course, he refused to condemn the KKK or disavow the endorsement of David Duke during the 2016 campaign. https://t.co/BqxdyLXFh2

And there was Charlottesville, Puerto Rico, “Pocohontas”, “my African American over there” and…oh wait there’s a whole list (although it’s no longer definitive): https://t.co/LY6X5EWjjZ

“Our President’s history on this issue is heartbreaking, maddening, and disgusting,” Menendez concluded. “But my commitment to racial justice will never waiver, and I urge my colleagues to stand strong as well.”

What Menendez has failed to recognize about Trump is that he hurls insults, including those about stupid or low IQ people, against people who oppose and criticize him, regardless of their race or gender.

Before the election that tended to be against political rivals who were mostly white, but that tended to change after his inauguration, as the Washington Post even pointed out.

Of course, back then, his political opponents were mostly white people: those running against him in the Republican primary and the conservative establishment broadly opposed to his candidacy. He called Karl Rove, former George W. Bush adviser, stupid five times, including in interviews. Bloomberg’s Tim O’Brien, whom Trump once sued unsuccessfully for alleged libel, earned the description three times, as did television host Glenn Beck. (WaPo)

In recent months Trump has railed against Democratic Rep. Maxine Waters as a low IQ individual—but she’s also been a vocal critic of him, repeatedly calling for his impeachment. The latest spat with Lemon was the third time he’s referred to him as stupid, but again, the CNN anchor has said it’s his “obligation as a journalist” to call Trump a racist and on a separate occasion talked about calling out Trump as a liar.

Trump’s recent criticisms of white people as unintelligent have been directed at MSNBC host Mika Brzezinski, former FBI Director James Comey, and former director of national intelligence James Clapper—all of whom have been very critical of him.

But this obvious truth about Trump's attacks will continue to be ignored by the left. After all, it's much easier and politically expedient to label the president as racist, sexist, and xenophobic.