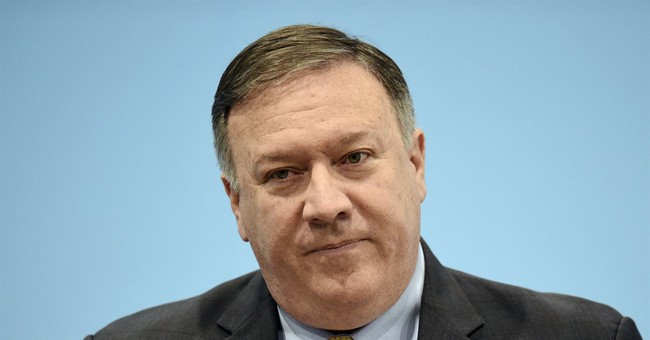 Secretary of State Mike Pompeo said only “enormous change” by Iran would reverse sanctions the Trump administration will reimpose on the country starting Monday.

"We’re very hopeful that we can find a way to move forward, but it’s going to require enormous change on the part of the Iranian regime," Pompeo told reporters. "They’ve got to – well, they’ve got to behave like a normal country. That’s the ask. It’s pretty simple."

Pompeo said the United States will enforce sanctions as long as Tehran keeps up its “malign activity.”

"Perhaps that’ll be the path the Iranians choose to move down," Pompeo said. "But there’s no evidence to date of their desire to change and behave in a more normal way."

A first set of U.S. sanctions that had been eased by the Obama administration under the terms of the landmark 2015 Iran nuclear deal takes effect on Monday, following Trump’s May decision to withdraw from the accord. Those sanctions target Iran’s automotive sector as well as gold and other metals.

A second batch of U.S sanctions targeting Iran’s oil sector and central bank will be re-imposed in early November. (AP)

Pompeo said if Iran, which he called one of the world’s largest state sponsors of terrorism, wants to be treated like an equal in the international community it needs to behave like one—stopping these types of practices.

Iran “has treated its people very poorly, and that’s led to terror. They’re the world’s largest state sponsor of terror. That’s what America is trying to get Iran to stop doing. That’s the behavioral change that we’re looking for from the Iranian regime,” he told Metro TV in Jakarta, Indonesia.

“The president has always said he is prepared to talk, but it’s important that Iran has to be committed to changing its ways in order for those discussions to prove of any value,” he added.

Trump wrote in a tweet on Saturday that “Iran, and it’s economy, is going very bad, and fast! I will meet, or not meet, it doesn’t matter - it is up to them!”

Iran, and it’s economy, is going very bad, and fast! I will meet, or not meet, it doesn’t matter - it is up to them!