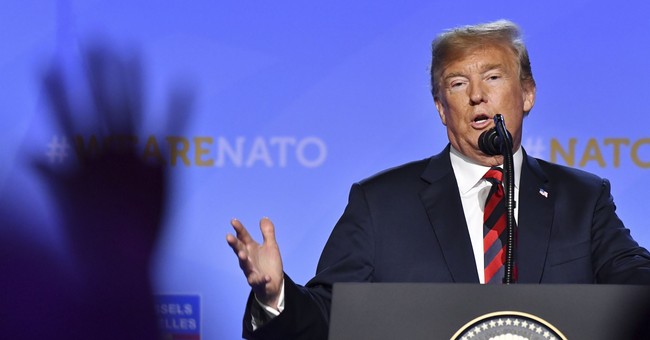 Speaking to reporters in Brussels on Thursday, President Trump, who again dubbed himself a “stable genius,” called the NATO summit a success after he got allies to agree to increase defense spending.

“This has been a tremendously successful NATO summit. I’ve convinced the others to increase their military spending. The U.S. commitment to NATO remains strong,” Trump declared.

“Yesterday, I let them know that I was extremely unhappy with what was happening and they have substantially upped their commitment,” he said.

Trump on Wednesday urged members of the alliance to meet their commitment of at least 2 percent of their gross domestic products by 2024, and eventually 4 percent. If this happens, it could result in an increase of $40 billion in defense spending.

“The United States was not being treated fairly, but now we are,” he added. “I believe in NATO."

French President Emmanuel Macron denied Trump’s claim that NATO members agree to increase defense spending above 2 percent, however. Wednesday's agreement, he said, “confirms the goal of 2 percent by 2024. That’s all.”

International reporters asked questions on a wide range of issues, including whether the president’s message would change once he left the summit.

“We understand your message, but some people ask themselves, will you be tweeting differently once you board the Air Force One?” one reporter asked.

Asked if his comments at NATO will change once he leaves Brussels and starts tweeting again, President Trump says no and he's a "very stable genius." pic.twitter.com/1Lf9Fn8FVU

“That's other people that do that," Trump replied.

Regarding his upcoming meeting with Russian President Vladimir Putin, Trump explained he is a competitor, not an enemy.

“He’s a competitor," the president said. "Somebody was saying ‘is he an enemy?’ He’s not my enemy. ‘Is he your friend?’ No, I don’t know him very much. But the couple of times I’ve met him, we’ve gotten along well…. Hopefully, someday, maybe he’ll be a friend. It could happen."

JUST IN: President Trump on his relationship with President Putin: "He's been very nice to me," and he's a competitor, but he's not my enemy and not a friend -- but hopefully some day he'll be a friend. pic.twitter.com/Jhv1sT8Axv