DHS Secretary Slams 'Misreporting' of Immigration Practices: 'We Don't Have a Policy of Separating Families at Border. Period.' 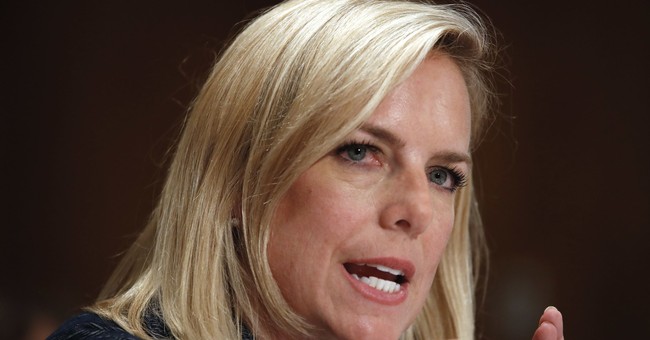 Homeland Security Secretary Kirstjen Nielsen defended the department’s immigration enforcement practices Sunday, tweeting, “We do not have a policy of separating families at the border. Period.”

“This misreporting by Members, press & advocacy groups must stop. It is irresponsible and unproductive. As I have said many times before, if you are seeking asylum for your family, there is no reason to break the law and illegally cross between ports of entry,” she added.

Nielsen reiterated that it is not illegal to seek asylum at a port of entry and made clear the conditions under which children would be separated.

“For those seeking asylum at ports of entry, we have continued the policy from previous Administrations and will only separate if the child is in danger, there is no custodial relationship between 'family' members, or if the adult has broken a law,” she said. “DHS takes very seriously its duty to protect minors in our temporary custody from gangs, traffickers, criminals and abuse.”

Nielsen’s tweets come after intense criticism of the administration’s policy from the media, activists, and some lawmakers.

Democrats and some Republicans have in recent days visited facilities used to house separated family members, leading to new questions about the process and growing calls for the so-called zero tolerance immigration enforcement policy to end.

The letter cites multiple instances where families seeking asylum were separated, despite the administration's assurances that wasn't the case. The senators asked for details on when children are separated from their parents, what the purpose of doing so is, and how many children have been separated during the asylum claim process. (The Hill)

Attorney General Jeff Sessions defended the “zero tolerance” immigration policy in recent days, which calls on law enforcement to prosecute all illegal immigrants, which has led to the separation of children from their families.

The Associated Press reported last week that approximately 2,000 children were separated from their families at the U.S.-Mexico border during a six-week period from April 19 through May 31.