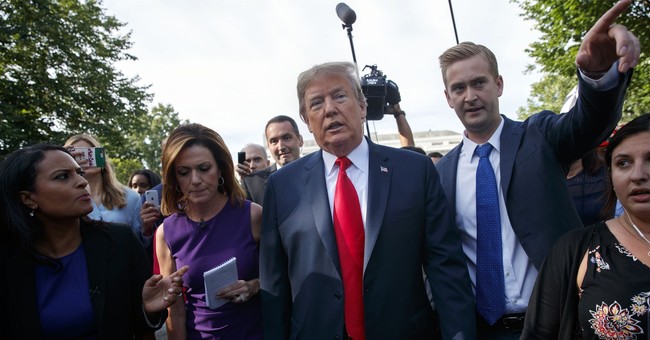 President Trump gave a lengthy impromptu interview Friday morning outside the White House to Fox News and other media outlets.

The president tweeted earlier Friday that he saw “Fox and Friends” was on the front lawn and that he may take an “unannounced trip down to see them.” Sure enough, the president paid the outlet a visit, granting them a roughly 30 minute interview before moving on to answer questions other questions from the press.

Trump weighed in on number of issues including the Department of Justice’s inspector general report, the GOP’s compromise immigration bill, his summit with North Korea, and tariffs, among other topics.

“I think that the report yesterday - maybe more importantly than anything - it totally exonerates me. There was no collusion. There was no obstruction. And if you read the report, you’ll see that,” the president told reporters.

He also said it showed “bias against me and millions and tens of millions of my followers that is really a disgrace.”

President @realDonaldTrump on what’s next now that DOJ IG report has been released pic.twitter.com/otZtfjHQ6H

On immigration, the president said he would not sign the GOP’s compromise bill.

“I certainly wouldn’t sign the more moderate one,” Trump told “Fox & Friends.” “I need a bill that gives this country tremendous border security. I have to have that,” adding, “we have to have a wall. If we don't have the wall, there's no bill.”

On North Korea, he said he got along well with dictator Kim Jong Un and that they have “good chemistry.” He also noted the country hasn’t done any nuclear testing in seven months, they’re destroying their test sites, they’re giving back the thousands of remains of U.S. soldiers from the Korean War. And sanctions, he commented, will only come off once the U.S. is certain North Korea has completely denuclearized.

On the G-7 summit, Trump said he has great relationships with the leaders.

He also discussed the economic achievements under his administration.