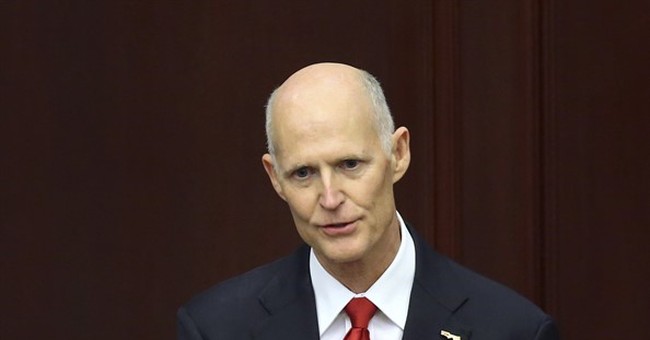 8 years ago today, I did something that everyone told me not to do – I announced that I was running for Governor. With the hard work of Floridians, we have come a long way, but our work is not done. That's why I have decided to run for the United States Senate. Let’s Get to Work! pic.twitter.com/zirHas1mzR

Scott, who is expected to announce his decision to take on the Democrat Monday in Orlando, called Washington “horribly dysfunctional.”

Please join me on Facebook Live, tomorrow at 10AM to hear my big announcement. https://t.co/xUNFWdyGxN pic.twitter.com/ov8mItqZXZ

The Republican governor, a multi-millionaire who won the governorship in 2010 as a political novice, emphasized to Politico that he’s independent-minded, not to be labeled a “Donald Trump Republican.”

“I run on what I believe in. I’ve been very clear,” he added. “People ask me that a bunch of times, about ‘Are you this or are you that?’ No. I’m Rick Scott. I grew up poor. I believe in jobs.”

That line is almost an understatement for Scott: The “jobs” message is the raison d'être for his political identity, born in 2010 when faith in the state and national economy were low and unemployment numbers were high. “Jobs, jobs, jobs” was Scott’s mantra in English and, during phone-banking campaign stops in Miami in 2010 and 2014, in Spanish: “trabajo, trabajo, trabajo.”

“What I focused on when I got elected was getting 700,000 jobs over seven years and changing the direction of the state,” Scott told POLITICO. “And the business community has really shown up. We cut their taxes, reduced regulation and we’ve added right about 1.5 million jobs.” (Politico)

On whether he wanted Trump to campaign for him, Scott wouldn’t say.

The race will surely be one of the most-watched and most expensive races in the country.