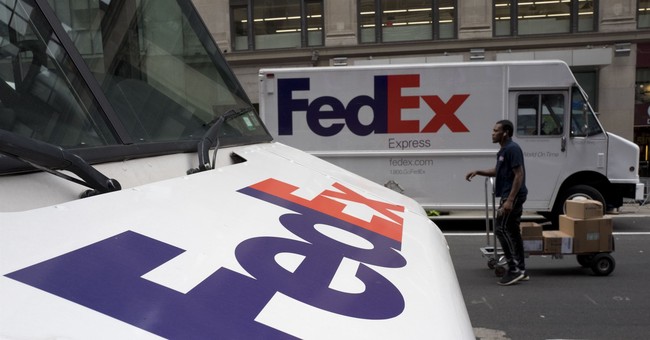 A package that was destined for Austin, Texas, exploded early Friday morning at a FedEx distribution center near San Antonio.

The package exploded around 12:25 a.m. local time and injured one employee, according to the Associated Press, who "apparently suffered a non-life-threatening 'percussion-type' injury from the blast."

MAJOR INCIDENT SCHERTZ TEXAS AREA. This is what we have gathered unofficially:
Shortly after 12 midnight, a package destined for Austin, Tx detonated at the FedEx distribution facility located at 9935 Doerr Lane. The package was said to have contained nails and shrapnel.

Of the 75 people working at the facility, only one complained of injury described as a non life threatening percussion type injury.
All inbound and outbound packages are in limbo, and transport vehicles are in gridlock. At this hour, ATF and FBI assets are beginning to arrive.

The incident marks the fifth explosion of a device linked to Austin. Authorities believe the attacks are related and have labeled the suspect a “serial bomber,” as the devices have killed two people and injured several others so far.

Had Tuesday’s package reached its intended recipient, it could have proved lethal.

"[T]he package was moving from an elevated conveyor belt to a lower section when it exploded," according to CBS Austin, noting that it "contained shrapnel consisting of nails and pieces of metal, sources said.”

Texas Gov. Greg Abbott vowed to find the suspect behind the attacks on Monday and said more than 500 federal agents are working throughout the city and state to find the perpetrator.

Austin Interim Police Chief Brian Manley, the Federal Bureau of Investigation and the Bureau of Alcohol, Tobacco, Firearms and Explosives held a press conference Sunday announcing they were increasing the reward to $115,000 if someone has information that leads to the arrest and conviction of the bomber.