Flake to Introduce Legislation That Would Nullify Trump's Tariffs 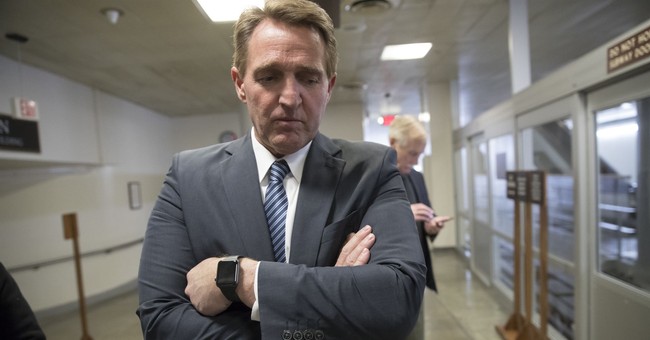 "I will immediately draft and introduce legislation to nullify these tariffs, and I urge my colleagues to pass it before this exercise in protectionism inflicts any more damage on the economy," Flake said in a statement.

“These so-called ‘flexible tariffs’ are a marriage of two lethal poisons to economic growth — protectionism and uncertainty. Trade wars are not won, they are only lost. Congress cannot be complicit as the administration courts economic disaster," Flake’s statement continued.

I will immediately draft and introduce legislation to nullify these tariffs, and I urge my colleagues to pass it before this exercise in protectionism inflicts any more damage on the economy. https://t.co/Js9TNzPRBc

While many Republicans opposed Trump’s tariff plan, what they can do about it in Congress is uncertain.

Legislation that aims to undo the new policy would need two-thirds in both the House and Senate to override a veto from Trump.

Sen. Mike Lee (R-UT) also said he will work to make sure the tariffs are never imposed.

“The tariffs announced by the president today impose a tax hike on the American people—one that will harm both workers and consumers,” he said in a statement. “While I am sympathetic to the issues facing domestic steel manufacturers, there are better ways to address the steel industry’s concerns. In the meantime, I will work with my colleagues to use Congress’s Article I power to make sure these tax hikes are never enforced.”

I released the following statement today after President Trump signed an order imposing tariffs on steel and aluminum pic.twitter.com/VReNhdFpK9