Mulvaney: If I Were Still a Member of Congress I Wouldn't Vote for Trump's Budget 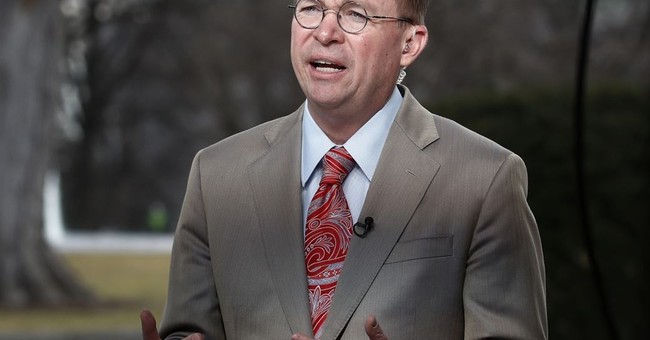 Office of Management and Budget director Mick Mulvaney said Tuesday he wouldn’t support President Trump’s budget proposal if he were still a member of Congress.

During a hearing with the Senate Budget Committee, Mulvaney agreed with many lawmakers who criticized the president’s budget for not doing enough to tackle the national debt.

His honesty was a welcome change to Democratic Sen. Patty Murray (Wash.), who asked the OMB director if he, as a member of Congress, would vote for the budget he was there presenting.

"Sure, and I'll give the same answer I gave on Sunday," Mulvaney responded. "Which is, that as a member of Congress representing the 5th District of South Carolina, I probably would have found enough shortcomings in this to vote against it."

"But I'm the director of the Office of Management and Budget," he continued. "My job is to try and fund the president's priorities, which is exactly what we did."

"So you would say this is a no, as a member of Congress?" Murray questioned.

“Yeah, I think I've said that before," Mulvaney said. "I don't think that reflects on my opinion of it as a member of the administration."

"OK," Murray replied with a laugh.

She later took to Twitter to praise the director for his honesty on the issue.

"It was nice to hear an honest answer from OMB Dir. Mulvaney in the budget hearing today. I asked if he would vote for President Trump’s budget if he were in Congress, and he said that he wouldn’t," she wrote. "That’s one thing we agree on!"

It was nice to hear an honest answer from OMB Dir. Mulvaney in the budget hearing today. I asked if he would vote for President Trump's budget if he were in Congress, and he said that he wouldn't. That's one thing we agree on! -PM

Mulvaney, known as a fiscal hawk during his time in Congress, appeared on CBS’s “Face the Nation” Sunday to explain that he has different priorities now that he is a member of the Trump administration.

"Right now, the top priority for this president was getting the Defense Department the money necessary to defend the nation," he said.