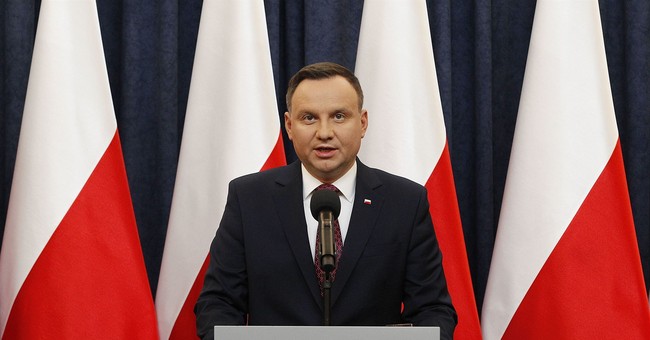 Polish President Andrzej Duda said Tuesday that he will sign an extremely controversial bill that makes it a crime to accuse Poland of any complicity in the Holocaust or describe Nazi death camps as Polish. He also said, however, that he would be sending the legislation to the nation’s Constitutional Tribunal for further review.

The measure bans any accusations that Poles were involved in Nazi crimes within its borders, including the infamous concentration camp Auschwitz, which is where more than 1.1 million Jews, among others, died.

“This guarantees Polish interests, such as our dignity and the historical truth -- that we will be fairly evaluated in the world,” Duda told reporters in Warsaw. “On the other hand, my decision takes into account the sensitivity of people for whom the historical truth and the truth about the Holocaust is extremely important.”

Anyone found guilty of violating the law could face punishment of up to three years in prison or fines.

Not surprisingly, the bill has been widely opposed by the United States and Israel.

Israel’s Holocaust Remembrance Center similarly cautioned that the bill could “blur the historical truths regarding the assistance the Germans received from the Polish population during the Holocaust,” though it agreed that the term “Polish death camps” was a historical misrepresentation.

Agnieszka Markiewicz, director of the American Jewish Committee's central Europe office, agreed that the term “Polish death camps” should not be used, but she emphasized that a ban was the wrong way forward. “Where the problem lies is that the bill is very broad, and [that term] is not even mentioned in it,” Markiewicz told The Washington Post on Thursday.

“We’re facing the biggest crisis in Polish-Jewish relations since after 1989,” she said, referring to the year the Berlin Wall came down. “The way this conflict has escalated is horrible. There are things that have been said and done on both sides — including by Israeli politicians who said that there were Polish camps — which haven't been helpful. Polish people don’t bear responsibility for the Holocaust, as such. But like other nations, they do bear responsibility for the behavior or attitudes of some.” (WaPo)

"We are also concerned about the repercussions this draft legislation, if enacted, could have on Poland's strategic interests and relationships," she said. "The resulting divisions that may arise among our allies benefit only our rivals."

Israel is hoping that by sending the legislation to the constitutional court, there is still time to work with Polish authorities before a ruling is made. The tribunal could send the bill back to lawmakers asking for parts—or all—of the legislation to be changed.