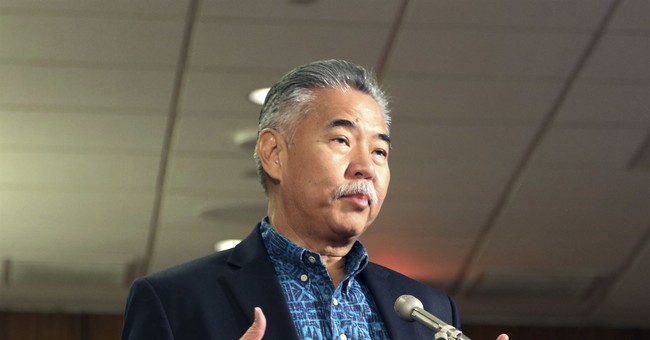 Hawaiian residents were terrified when a government official accidentally issued an alert earlier this month about an incoming ballistic missile, warning them to seek immediate shelter.

Worse yet, the mistake was not officially corrected by the state for 38 minutes.

“I have to confess that I don’t know my Twitter account log-ons and the passwords, so certainly that’s one of the changes I’ve made,” Democratic Gov. David Ige told reporters.

Minutes after the Hawaii Emergency Management Agency mistakenly sent a missile alert at 8:07 a.m. on Jan. 13 — terrifying residents and visitors across the state — some officials, such as Rep. Tulsi Gabbard (D-Hawaii), rushed to Twitter to reassure everyone it was a mistake.

But one Twitter account was deafeningly silent for 17 minutes: that of Hawaii Gov. David Ige. Though Ige was informed by the state’s adjutant general that the alert was false two minutes after it was sent, he waited until 8:24 a.m. to tweet, “There is NO missile threat.” (The Washington Post)

“I was in the process of making calls to the leadership team both in Hawaii Emergency Management as well as others. The focus really was trying to get as many people informed about the fact that it was a false alert,” Ige said.

He promised he has since saved the log-in information on his cell phone to prevent a similar situation.

“I’ve been putting that on my phone so that we can access the social media directly,” Ige said.

The Federal Communications Commission promised to investigate the incident.

“We have been in close contact with federal and state officials, gathering the facts about how this false alert was issued,” Chairman Ajit Pai

said in a statement on Sunday. “Based on the information we have collected so far, it appears that the government of Hawaii did not have reasonable safeguards or process controls in place to prevent the transmission of a false alert.”