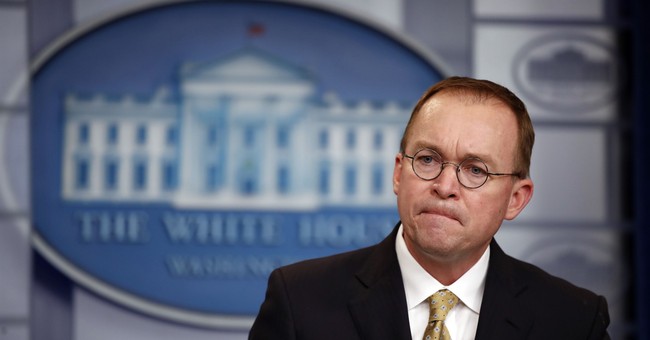 If Office of Management and Budget Director Mick Mulvaney is right, the government shutdown may not wrap up as quickly as many are hoping.

Appearing on “Fox News Sunday,” Mulvaney predicted the shutdown could last more than a week, but expressed hope it is resolved in time for federal employees to return to work on Monday morning, which did not happen as the vote was moved from 1 a.m. Monday to noon.

“I think Democrats want to see the president give the State of the Union under a shutdown,” he told host Chris Wallace.

The State of the Union is January 30.

No matter how long the government shutdown lasts, Mulvaney said it will not be as dramatic as the 2013 shutdown.

"Most Americans won't see a difference. You go to the airport on Monday, the TSA will still be there. The military is still at work," he said. "Now, they're not getting paid, and that's wrong, but in terms of what you will see, it will not be as dramatic as what you saw in 2013."

A quick update on the where things stand in the #Senate. pic.twitter.com/BalWNAdBCn

Here's a quick recap of where things stand:

Where things stand
-No deal as of late Sun
-Talks ongoing
-Senate comes back 10am Mon
-Vote noon Mon. on CR till Feb. 8
-Flake now a “yes” on that
-McConnell signals he’s open to an imm. vote
-Dems not ready to cut a deal, but not walking away