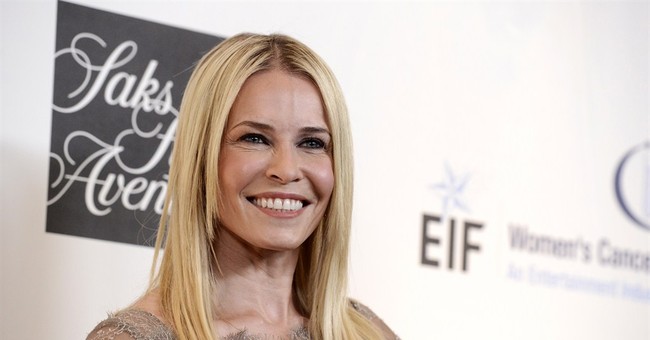 Noting that she just watched the bipartisan meeting the president held Tuesday on immigration, Handler suggested the only way the senator from South Carolina would go along with Trump on immigration reform is if he’s gay and is being blackmailed.

"Holy, f*** f***," she tweeted. "I just the video of trumps bipartisan "meeting" yesterday. Hey, @LindseyGrahamSC what kind of dick sucking video do they have on you for you 2 be acting like this? Wouldn’t coming out be more honorable?”

Holy, fuck fuck. I just the video of trumps bipartisan “meeting” yesterday. Hey, @LindseyGrahamSC what kind of dick sucking video do they have on you for you 2 be acting like this? Wouldn’t coming out be more honorable?

Graham, who’s never been married, has long been a vocal critic of Trump’s, but during the public meeting on the Deferred Action for Childhood Arrivals program held Tuesday, he heaped plenty of praise on the president. RealClear Politics transcribed some of his remarks:

SEN. LINDSEY GRAHAM: I've been doing this for ten years.

I don't think I've seen a better chance to get this done than I do right now, because of you.

I'm not going to support a bill if you don't support it. I've had my head beat out a bunch, I'm still standing. I'm 'Lindsey Grahamnesty,' 'Lindsey Gomez,' you name every name you want to give me, it has been assigned to me. And I am still standing. The people of South Carolina want a result.

How could I get elected? I've been for a pathway to citizenship for eleven million people, because I have no animosity for them. I don't want crooks, I don't want bad hombres, I want to get a merit-based immigration system to make sure we can succeed in the 21st Century. I'm willing to be generous with the 11 million [illegal immigrants], I just don't want to do this every 20 years.

Now, we made the decision not to do it comprehensively. I think that is the hard decision, but the smart decision. We passed three comprehensive bills out of the Senate with over 65 votes. They go to the House and die, I am not being disparaging to my House colleagues, but this is not stuffed politics if you're a Republican House member turning on the radio.

To my Democratic friends, thanks for coming. The 'Resist' movement hates this guy. They don't want him to be successful at all. You turn on Fox News, and I can hear the drumbeat coming. Right wing radio and TV talk show hosts are going to beat the crap out of us because it is going to be amnesty all over again.

I don't know if the Republican and Democratic Party can define love, but I think what we can do is what the American people want us to do.

62% of Trump voters support a pathway to citizenship for the DACA kids, if you have strong borders.

You have created an opportunity here, Mr. President, and you need to close the deal. (RCP)

You're a disgusting human being, Chelsea. https://t.co/V4sbSsihZN

Apparently homophobic slurs are ok as long as they’re against a Republican https://t.co/JLHMChWswO pic.twitter.com/9l3ubnSl9I

There has been no word yet from Twitter on whether Handler’s tweet amounts to abuse or harassment, as has been suggested.