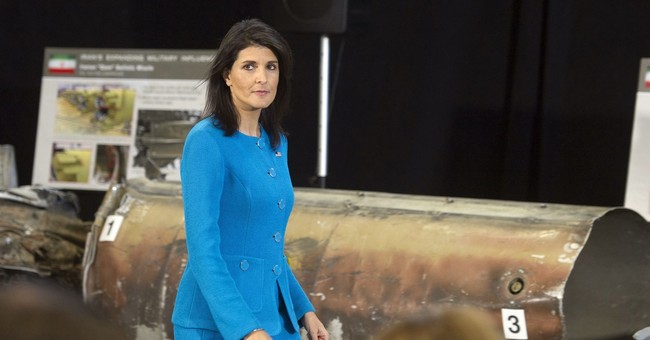 “The nuclear deal has done nothing to moderate the regime’s conduct in other areas. Aid from Iran’s revolutionary guard to dangerous militias and terror groups is increasing,” she said at a press conference at Joint Base Anacostia-Bolling while standing in front of military debris. “Its ballistic missile and advanced weapons are turning up in war zones across the region. It’s hard to find a conflict or a terrorist group in the Middle East that does not have Iran’s fingerprints all over it.”

The debris included parts of two short-range ballistic missiles that were recently launched by the Houthis into Saudi Arabia, according to the Pentagon; a self-guided unmanned anti-ship explosive boat; an anti-tank guided missile; and an aerial drone equipped with explosives.

Haley said the debris shows Iran is violating the UN Security Council’s 2015 resolution 2231, which endorses the Iran nuclear deal, prohibits Iran from any activity that would advance its ballistic missile program, and bans them from transferring weapons.

“We have said everything doesn’t have to be tied to the nuclear deal, but it does have to be tied to the security council resolutions. This is blatant violation of what they are not supposed to be doing,” Haley said. “Everybody has tip-toed around Iran in fear of them getting out of the nuclear deal, and they are allowing missiles like this to be fired over to innocent civilians.”

Haley said the weapons were found by Saudi Arabia and the United Arab Emirates.

“When you see the evidence, it is absolutely indisputable,” Haley said.

“Today, one of the things that we’re doing with all this information is the first step of implementing President Trump’s Iran strategy, which is to expose this behavior, to be clear about it, to show it to the world and be clear eyed so we can go forward together as a community, the US and our partners in the United National in addressing the totality of the Iranian threat," said Laura Seal, a Pentagon spokesperson.