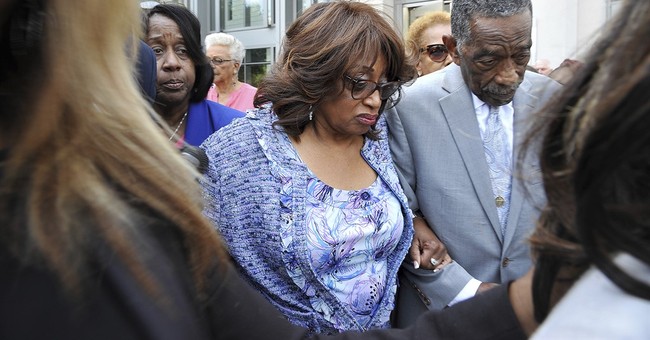 Former Florida Rep. Corrine Brown was sentenced to five years in prison Monday for fraud and other charges related to a fake charity.

The Democrat, who was elected to Congress 12 times but was defeated in her 2016 primary race, was convicted by a federal jury in May on 18 of 22 charges involving wire, tax, and mail fraud.

Her sentence also includes serving three years of supervised release as well as paying $250 a month in restitution after her she's out of prison.

At its core, the case was focused on One Door, a group billed as a charity for disadvantaged children that raised more than $800,000 over a four-year stretch. In fact, most of that money benefited Brown personally. Of the $833,000 raised, only $1,200 went toward scholarships.

The rest paid for things such as events and travel for Brown and those in her orbit, as well as dozens of cash deposits to her personal bank account and a range of frivolous expenses, like nearly $14,000 for Beyonce tickets and $15,000 for a suite at a Jaguars-Redskins game.

A jury found Brown guilty in May of 18 counts of federal mail, wire and tax fraud for soliciting donations for the fake charity, using that charity as a “slush fund” for herself and her associates, and lying on her taxes and congressional disclosure forms. (News4Jax)

“This was a crime born out of entitlement and greed committed to ensure a lifestyle that was beyond their means,” U.S. District Judge Timothy Corrigan said during sentencing.

Charles P. Spencer, FBI Jacksonville Special Agent in Charge, said Monday in a statement that more should be expected from an elected official.

"It is incredibly disappointing that an elected official, who took an oath year after year to serve others, would exploit the needs of children and abuse the charitable hearts of constituents to advance her own personal and political agendas, and deliver them with virtually nothing," he said.

Brown, whose attorney said she plans to appeal the sentence, was ordered to voluntarily report to prison authorities no sooner than January 8.