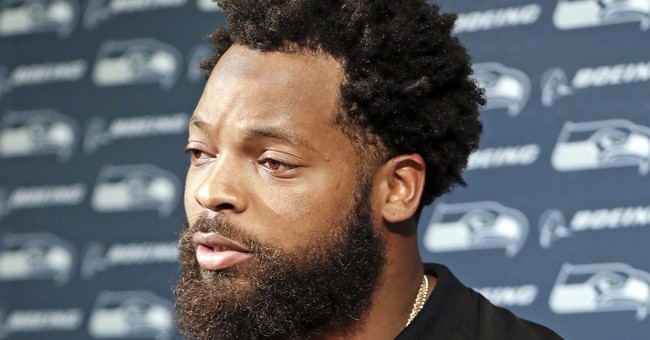 Seattle Seahawks defensive end Michael Bennett gave up his protest of the national anthem Thursday and stood with his teammates to show respect for America’s veterans during the Salute For Service game against the Arizona Cardinals.

Michael Bennett and the rest of the Seahawks stood for the national anthem prior to #SEAvsARI https://t.co/PMEdtUH28v pic.twitter.com/LQfduI0hhX

Bennett, whose father served in the Navy, has defended his son’s protests.

“I joined the military so people like Michael and Martellus and whoever else out there can take a knee or make a stand, peacefully, and get their point across and not be ridiculed," Bennett Sr. told Sports Illustrated in September. "I lose all respect for people if you really can’t see what’s going on in your own country that you live in everyday.  People don’t care about people. They care about animals and they care about people that look like they look.”

Bennett will likely go back to kneeling after Veterans Day weekend, which some have pointed to as evidence the protests have nothing to do with disrespecting U.S. troops and everything to do with criminal justice reform.

The Seahawks player explained in August why he was protesting.

"I hope that I can activate everybody to get off their hands and feet and go out into the communities and push helping each other," he said at the time. "Sit down with somebody that's the opposite sex, sit down with somebody that's the opposite race, different religion and understand that people are different and go out and join the community and try to change the society, change what you're a part of. If you don't like it, keep changing it."

He added: "Charlottesville had a lot to do with it but I think it's just the journey of who I am as a person. I think everybody has a time where they feel like they need to be who they are and stand up for what they believe in.”

The NFL players union has requested everyone in the league observe a two-minute moment of silence Sunday for U.S. military veterans.