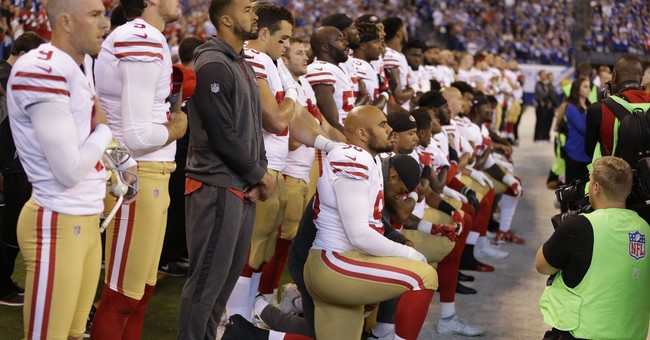 Former NFL quarterback Colin Kaepernick may be out of a job playing professional football, but that doesn’t mean he doesn’t have job prospects out there.

According to a recently released poll from Northwestern University's Center for the Study of Diversity and Democracy, a majority of African Americans see the Black Lives Matter movement as effective but they want a national spokesperson, and they think Kaepernick would be a great choice.

"There are two trends in the data that suggest that they also see room for improvement. First, a large majority believes that the movement should focus its efforts on two issue areas -- challenging police brutality and racial profiling (49 percent) and improving race relations (25 percent) -- over all other issues," according to the survey analysis.

One major finding that stood out in the survey is the desire for a national leader—the former San Francisco 49ers quarterback stood out among the choices given to respondents. The movement could even be expanded with someone like Kaepernick at the helm.

"Kaepernick's popularity is not surprising in light of the fact that President Trump's criticism of the ‘Take A Knee' protests that he started in the NFL has thrown him into the national spotlight in recent weeks," said Alvin Tillery, associate professor of political science and director of the CSDD at Northwestern, reports The Washington Examiner.

"The most important finding in the survey is that African-Americans are not taking part in protests, organizing meetings and fundraising activities related to BLM in their local environments in anywhere near the rate that most had assumed," he added. "These numbers provide an impetus and an opportunity for BLM activists and the nonprofits and politicians that support their work to take stock of what is happening and course correct."