Weinstein Speaks Out: Here's What He Had to Say 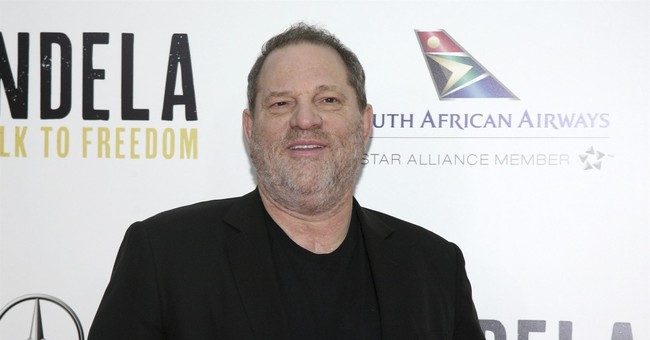 Harvey Weinstein’s world is crumbling around him—and deservedly so.  After a New York Times exposé revealed the Hollywood producer paid off women he sexually harassed for decades, at least 30 Hollywood stars came forward, accusing him of rape and sexual assault. As a result, he lost his company and his wife, Georgina Chapman, left him.

“My heart breaks for all the women who have suffered tremendous pain because of these unforgivable actions. I have chosen to leave my husband. Caring for my young children is my first priority and I ask the media for privacy at this time,” her statement to People read.

Nevertheless, Weinstein believes “we all make mistakes” and is hoping for a second chance.

That’s what he told paparazzi outside his daughter’s house Wednesday, admitting that he was “not doing OK.”

Earlier that morning his daughter had to phone the police, reporting him as suicidal.

He was also seen Wednesday giving the finger--on both hands--to people outside his lawyer's office.

"I gotta get help guys," he told the photographers. "You know what? We all make mistakes -- second chance, I hope."

He then took a shot at Hollywood celebs who have turned on him this week.

"And you know what? I've always been loyal to you guys," he told the paparazzi, adding "not like those f--king pricks who treat you like s--t. I've been the good guy."

Instead of flying to Europe for treatment as was previously reported, Weinstein took a private jet to Wickenburg, Arizona, which is where The Meadows is located—a rehab center that has previously helped celebs including Tiger Woods.