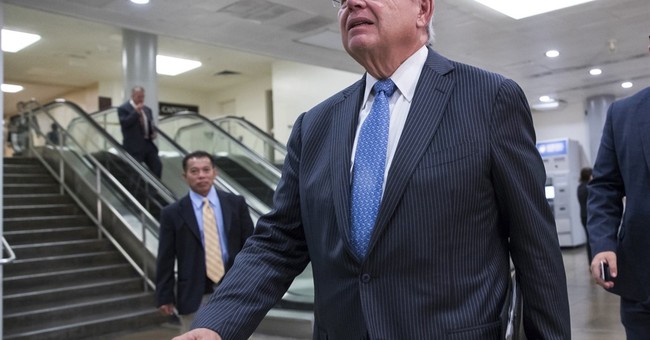 The New York Times ran an article on Monday about Democratic Sen. Bob Menendez, who is facing a federal bribery trial, which is set to begin this week.

The Times did not shy away from the magnitude of his alleged crimes: “Mr. Menendez is charged with 12 corruption-related counts, including six counts of bribery and three counts of honest services fraud.”

Indeed, the defense for Mr. Menendez is unlikely to dispute some of the facts; that Dr. Salomon Melgen, a wealthy Florida ophthalmologist, bestowed on the senator lavish gifts of private flights, luxury accommodations and free vacations – all which Mr. Menendez initially failed to disclose — and he made more than $700,000 in direct and indirect political contributions to Mr. Menendez.

The legal case revolves around whether those gifts were permissible as gifts a friend could give to another, or whether they were part of a longstanding bribery arrangement where Mr. Menendez would intervene to protect the financial and personal interests of Dr. Melgen in return for his gifts and donations. (NYT)

Nor did the paper ignore the fact that he is up for re-election next year in its lengthy article.

But what was initially missing was that Menendez is a Democrat.

Twitter users were quick to call the paper out.

For the first time in 36 years, a sitting United States Senator is facing a federal bribery trial https://t.co/nXIemGgtFo pic.twitter.com/DRez2caliO

The New York Times wrote a 1,288 word article that never once informs the reader that the Senator facing a bribery trial is a Democrat. https://t.co/qJ742kB4en

Not Mentioned: HE'S A DEMOCRAT

The author of the story acknowledged the criticism and said it was just an “oversight.”

Thanks Evan. Not odd, just an oversight on my part after drafts. Adding back now.

As you can guess, not that many people believed him.

Adding back? So it was originally in, then removed, now back. Odd.