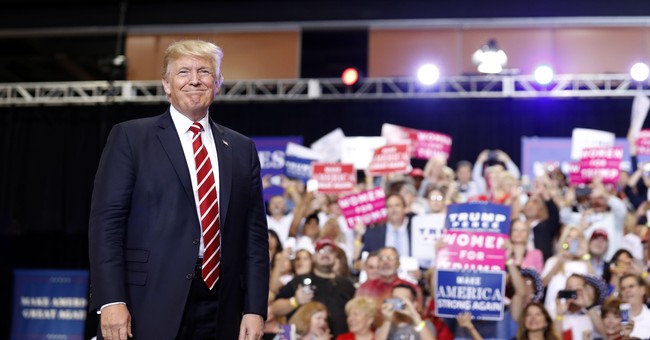 During his 77-minute “Make America Great Again” rally speech, President Trump railed against the media, but also discussed a government shutdown, NAFTA, and more. Here are six of the most important things you need to know from his speech.

1. Trump went after the media harder than usual, calling reporters “damned dishonest” and blaming them for fanning the flames of racial tension in the country. He reread his statements about the violence in Charlottesville but omitted the controversial “many sides” remark.

“They don’t want to report that I spoke out forcefully against hatred, bigotry, and violence, and strongly condemned the neo-Nazis, the white supremacists, and the KKK,” Trump said. “I’m really doing this more than anything else—because you know where my heart is—to show you how damn dishonest these people are.”

"I hope they're showing how many people are in this room, but they won't. They don't even do that. The only time they show the crowds is when there's a disrupter or an anarchist in the room."

2. Trump said the government would shut down if funding for the border wall doesn’t happen.

"Now the obstructionist Democrats would like us not to do it, but believe me, if we have to close down our government we're building that wall. ... Let me be very clear to Democrats in Congress who oppose a border wall and stand in the way of border security. You are putting all of America's safety at risk."

3. The president also suggested he may pardon Sheriff Joe Arpaio in the future.

“So was Sheriff Joe convicted for doing his job?” Trump asked the crowd. “You know what, I’ll make a prediction: I think he’s going to be just fine, okay? But I won’t do it tonight because I don’t want to cause any controversy. But Sheriff Joe should feel good.”

4. He blasted Arizona’s Republican Sens. John McCain and Jeff Flake, but did not mention them by name.

"One vote away! I will not mention any names. Very presidential, isn't it," Trump said referencing McCain, who voted against the GOP effort to repeal Obamacare.

And regarding Flake: "And nobody wants me to talk about your other senator who's weak on borders, weak on crime — so I won't talk about him," Trump said. "Nobody knows who the hell he is."

"See, I haven't mentioned any names, so now everybody's happy.”

5. On NAFTA, he said we’ll renegotiate or terminate the trade deal.

"We will renegotiate NAFTA, or we will terminate NAFTA. I personally don't think you can make a deal without a termination, but we're going to see what happens, OK? ... You're in good hands, I can tell you."

6. Trump also commented on the CEOs who left his council in the wake of his response to the violence in Charlottesville.

"When it got a little heat with the lies from the media, they sort of said, 'Oh, we'll take a pass.' ... I remember the ones that did."

"But people are now calling me, people that have been, like, 'we'll take a pass': 'Don, can we get together for lunch? Let's do it privately, instead of through a council.' ... They are calling, and they're saying: 'How about getting together privately?'"