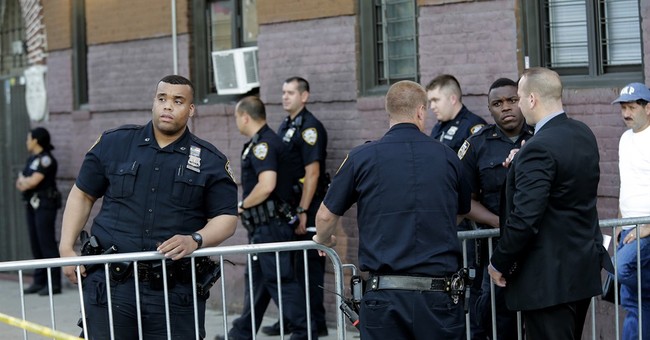 A New York City police officer was shot in the head and killed while sitting in her patrol car early Wednesday morning in what is being described as a “clear assassination.”

Officer Miosotis Familia, a 12-year veteran, was targeted while in the Bronx at 12:30 a.m. She was in the patrol car with her partner during the attack.

Other officers chased the suspect, who has been identified as 34-year-old Alexander Bonds, and shot him dead when they caught up to him about a block away. According to police, Bonds was on parole for a 2014 robbery in Syracuse, New York.

Bonds, whose criminal rap sheet includes an assault on a police officer with brass knuckles, a source said.

"Let's be clear. This was nothing less than an assassination of a police officer. Our understanding is she was filling out her memo book and he walked out and fired one round," the source said.

The source said Bonds, who boasts up to six different aliases, recently spoke critically of law enforcement on an unspecified social media site. He said police in Oakland, Calif., were wrong to stop a child riding a bicycle.

An innocent bystander standing next to Bonds was shot in the stomach during the deadly confrontation with police but is in stable condition, police said.

Police said it was not known whose gunfire hit the bystander, who has no connection to the suspect. (NY Daily News)

"It is obvious this was an unprovoked attack on police officers," NYPD Commissioner James P. O’Neill said during a press briefing at 3:30 a.m. at St. Barnabas Hospital, where Familia died minutes later.